Do you Dare to Call it Treason? 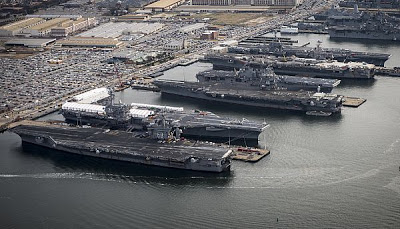 Old NFO also noted that the Atlantic Fleet’s Amphibious assult ships (sort of a helicopter carrier that also delivers Marines to the beach were there too:
Battan (LHD5) fourth up, Wasp (LHD1) sixth up, and Kearsarge (LHD3), so effectively eight big (and bigger) decks all in a row.

Ever since the attack on Pearl Harbor, the US Navy made a point of not putting all of the fleet’s ships in one place because they are vulnerable to attack if you do that. One small nuclear weapon detonated at Norfolk, Virginia would effectively sink the entire fleet. The ships are there because President Obama is acting like a BABY who wants to increase taxes and spending and Congress is holding him to his proposed sequester trigger which would reduce the (bloated) national budget by 3% – spread over a year – beginning March 1.
If President Obama doesn’t get his way, he’ll compromise the safety and security of the nation.
Homeland Security Secretary Janet Napolitano has threatened to send all 5,000 Customs and Border Protection officers home on a furlough and by effect, open the US Borders to our potential enemies. All because of a 3% cut? Apparently.
Is this treason? It may not fit the legal definition but it’s damned close.