Truth defined from a “progressive” perspective: If they tell you something, and you believe it, it must be true. You could add lies about Benghazi, Fast and Furious and so many other scandals to the list.
The ACORN doesn’t fall far…

(NBC Chicago) A federal jury on Friday convicted the daughter of the Rev. Jeremiah Wright of money laundering and making false statements in connection with the alleged misuse of a grant from the state of Illinois.
“Jeri Wright chose to participate in the fraud, chose to receive and launder a portion of the proceeds of the fraud, and chose to repeatedly lie to law enforcement and a federal grand jury,” said U.S. Attorney Jim Lewis said in a statement after the verdict. “If you take and misuse government money, and then lie about it, you will be held accountable in a court of law.”

Senator Rand Paul (R-KY) has won the CPAC straw poll Saturday for potential 2016 presidential candidates, taking first place for the second straight year. I’m not sure where I stand on CPAC as a litmus test for a plebiscite. It’s generally populated by the same general sort of political groupies that flock to the Democratic Party’s conclaves.
The people (not the leadership) that populated the original Tea Party were quite different because they were made up of really worried members of the community who were brought together on a local basis to make common cause against the radical policies of the Obama Administration which were and have been focused on ‘radically transforming America’. The professional Tea Party types emerged in the wake of that spontaneous grass roots movement, feeding on contributions and promoting issues that the original Tea Party people were not concerned with. The Tea Party wanted to curtail massive public debt. They were successful in re-taking the House of Representatives in 2010.
While I personally like Rand Paul and distrust Chris Christie, for example, I don’t think that CPAC speaks for anybody except CPAC. 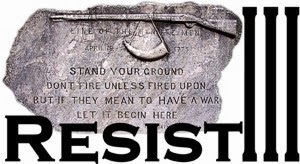 It seems that the Connecticut State Police are showing some spine.

(Examiner) A showdown is developing between a sizable number of Connecticut state police officers and the politicians who passed into law highly restrictive gun control, gun bans, and bans on high capacity magazines.

Gun rights legal expert and activist David Hardy reported Friday that 250 law enforcement officers in Connecticut have signed an open letter stating that they will not enforce the new anti-gun and magazine laws, which they consider to be a violation of the Second Amendment to the U.S. Constitution.