Facebook
Twitter
Pinterest
WhatsApp
My 23 year old girl told me yesterday that she is moving back home. She worked for me, but I had to lay her off because of economic considerations at my company. It’s tough to lay your kids off.
My 26 year old girl girl told me today that she is moving back home with her husband, who lost his job and their two little girls 2 and 5 years. He was working in the oil industry and while cheap gasoline is good for most of us, it doesn’t work that way for everyone.

I’m in a position to house an army because I live in a relatively open concept design home on 1/4 acre in the Los Angeles area with 6 large bedrooms, 4 full bathrooms and a 3 car garage. I’d been casting about to sell the place and relocate and it’s good that I held off because the children need a hand.

It was quiet. Not so much going forward. But noise isn’t a bad thing and my granddaughters are my little buddies.
In all truth, I’m pleased to be able to put a roof over their heads in times of difficulty. While the economy is improving in small ways, the Democratic Party’s strident brays (their totem is an ass) are hollow.
I heard on the news today that Mitt Romney is now considering a run for the presidency. Of all the contenders for the office of President, the one best qualified to tackle the economy is Mitt Romney. He is not as conservative as Rand Paul, who I also like, but he’s not Jeb Bush, Chris Christie and that ilk. And I think that Mitt would stand up well to Hillary. 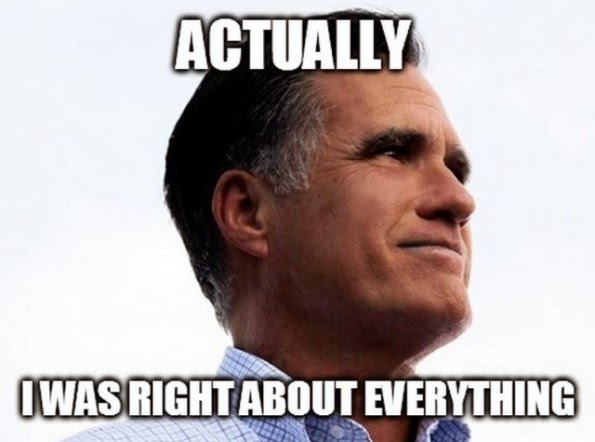 I realize that many of you who read this blog don’t like Mitt Romney because he’s far more liberal than you’d prefer. I’d prefer a more conservative Romney too, but when you think about what he said when he ran against Obama (and the Democrats mocked him), everything that he warned about from a resurgent Islamic State and the Russian invasion of Ukraine to an emboldened China — came true.

Some of you don’t like him because he’s a Mormon. But the guy irons his own shirts, goes shopping for himself, makes his wife breakfast every day and is a good dad and granddad. How does that stack up against Hillary?

I’m not ranting about Mitt, but the economy needs to dig itself out for real and I’d ask you else who can lead that charge.