Facebook
Twitter
Pinterest
WhatsApp
BURN MORE COAL – Save the Planet
Icy conditions have forced the cancellations of thousands of flights across the country, including nearly 70 percent of flights heading in and out of Atlanta’s Hartsfield-Jackson International airport, the busiest in the nation.
By Wednesday morning, more than 2,800 flights had been canceled, according to the tracking website Flightaware.com. Delta canceled nearly 2,200 flights on Tuesday and Wednesday, most of them in Atlanta.

WHO RULES THE EPA?

How is this possibly Constitutional? And isn’t the EPA supposed to be telling us how much emission is too much from the exhaust of our cars? How do they have the authority to take land from a US State and transfer it to a ‘sovereign nation’? Just curious.

(Fox News) Wyoming officials are gearing up for a potential court battle against the Environmental Protection Agency as they try to reverse a sweeping agency ruling that transferred more than 1 million acres of land — including an entire city of 10,000 — to Native American tribes. 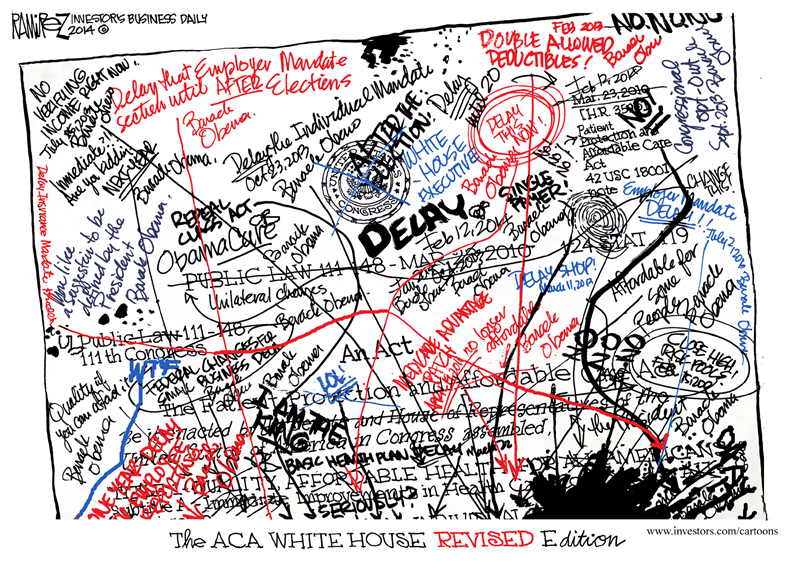 The President has ignored Congress and the law and has implemented ObamaCare by fiat. The word, “shall” means nothing these days as it is included in the law. Even a law that was passed without a single Republican vote is spurned as a “presidential guideline”. I’ve heard that there are now 27 major changes to the Affordable Care Act, all of which have been carried out with a presidential cell phone and pen.

I predict (and you can quote me here) that there will be another 27 major changes by the 2014 midterm elections. No, I am not gifted with prophecy but you don’t have to be a prophet to read the tea leaves and chicken bones where ObamaCare is involved.

A moral president would apologize to the American people and would humbly approach Congress to repeal ObamaCare. But Barack Obama is not a moral man.

For a man concerned for his legacy the way that Obama is, I’m slightly surprised that he hasn’t thown in the towel and told the American people that he did his best but it didn’t work out. That he doesn’t want to cost the nation 2.3 million jobs. That for all his good intentions (haha), it didn’t work out. That alone might secure a genuine legacy of respect that he’s not likely to enjoy otherwise.