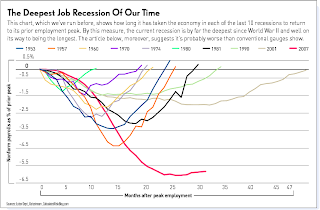 The true unemployment rate in America is close to 20% in some areas, less in others. The 9.X% numbers quoted by the government only applies to people currently receiving benefits. Those who didn’t find a job during their benefit period aren’t counted, independent contractors/workers who are not eligible for benefits are not counted. Neither are people who gave up looking for a job or took a job at 1/2 pay. Those are huge numbers and represent the gorilla in the corner nobody wants to talk about.
Of course the government is cooking the books. What would happen if they reported a jobless rate in the 20% range — we’d be in a DEPRESSION. But that’s not what they report, so we’re not. barack hussein obama is a liar – but that’s not news is it?
They White House reports that 3.5 million jobs have been created by the barack hussein obama regime. Polls indicate that 13% of Americans believe those numbers. I’d like to have the names of all of them so that I can sell them a bridge.
Investor’s Business Daily reported it this way:

According to Labor Department data, the civilian labor force in June totaled 153.7 million people, 14.6 million (9.5%) of whom were unemployed. But in the latest IBD/TIPP poll conducted last week, 28.6% of respondents said at least one member of their household is unemployed and looking for work. This number for June was 27.8% and for May 28%.

When we project our household job-seekers rate and calculate the share of Americans who are unemployed and looking for work, we get a job-seeker rate of 24.1% for July for a total of 37 million Americans vs. the government’s aforementioned 14.6 million.

To come up with its monthly jobless rate, the Labor Department surveys some 60,000 households. But the popular unemployment measure that results, dubbed U-3, is not a good indicator, because the department counts as “unemployed” only those who report actively looking for work in the past four weeks.

Some 8.6 million Americans responding to a tight job market have taken part-time jobs, though they’d like to be working full-time. In calculating U-3, the government counts these “underemployed” people as “employed,” which helps reduce the unemployment rate.

Another 6.5 million individuals in the government survey say they want a job, but they are counted as not being part of the labor force (“persons not in the labor force but who currently want a job”). This category includes 2.6 million who are marginally attached persons. Of these passive job-seekers, some have other obligations but would take a job if offered.

Businesses hire people when they can PREDICT economic conditions. The present regime is spitting nails because business is sitting on capitol and not hiring. They are not hiring because they’re concerned they’ll loose their shirts when the obama regime and their Congressional toadies spit out the next new round of “sweeping reform”.  Nobody with a lick of sense will move an inch to spend money when they think they’re going to lose it.
Most people agree that the quickest way to end the depression is to vote the barack hussein obama regime and their associates from office and replace them with people who have a modicum of sanity.