(Duffleblog) FT LEAVENWORTH, KS — An administrative error has been blamed for a mix-up in sentencing involving the cases of convicted Fort Hood shooter Maj. Nidal Hasan and Bradley Manning, the Army private convicted of leaking classified documents to the website WikiLeaks.

After sentencing concluded last Wednesday in Fort Hood, Texas, it was reported Hasan would undergo gender reassignment surgery and change his name from Nidal to Nahid Hasan. Nahid is an Arabic name meaning “one with full, round breasts.”

Not long after it was revealed, the traitor formerly known as Chelsea had been transferred to death row where he awaits execution by lethal injection.

Sequestration and work furloughs were also cited as possible contributors to the errors, which are now fiscally and administratively impossible to correct. Administrative offices in Leavenworth were unavailable for comment due to a “training holiday.” Hasan, once silent, is now vocally opposing to the situation. He had planned to receive 72 virgins as his reward and now he’s becoming one. I’m sure that he’ll make some dead jihadi in paradise a very lucky guy.
John Kerry – Anti-War Protester AND War Monger?

In shocking news, John Kerry plans to lead the effort to protest the Syrian War as soon as he’s able to get the war started.

WASHINGTON, DC — Secretary of State John Kerry announced he would be firmly against any military action in Syria, and plans to lead an anti-war movement to protest the conflict as soon as he finishes starting it, sources confirmed today.

Kerry, an allegedly decorated Vietnam veteran and outspoken anti-war activist, told reporters that he does not support a campaign of aggression against a sovereign nation that is not a clear threat to the United States.


Can minimum wage jobs at fast food establishments be replaced easily by machines? 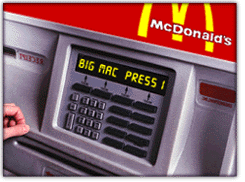 It’s already happening in Europe, where it costs a lot to hire a worker, McDonald’s has installed 7,000 new ATM-style machines that take orders and payments. No muss, no fuss, no arguments, no misunderstandings — and no minimum wage at all. Just a one-time cost for the machine, plus maintenance.

The fast food workers, mostly young with very few job skills or valuable life experience who are striking for more money need to consider that. But even unemployed, they can sponge off of their parent’s healthcare until age 26 when they will be forced to buy ObamaCare or pay the fine whether they are employed or not.