Dawn – Mission to Ceres and Vesta 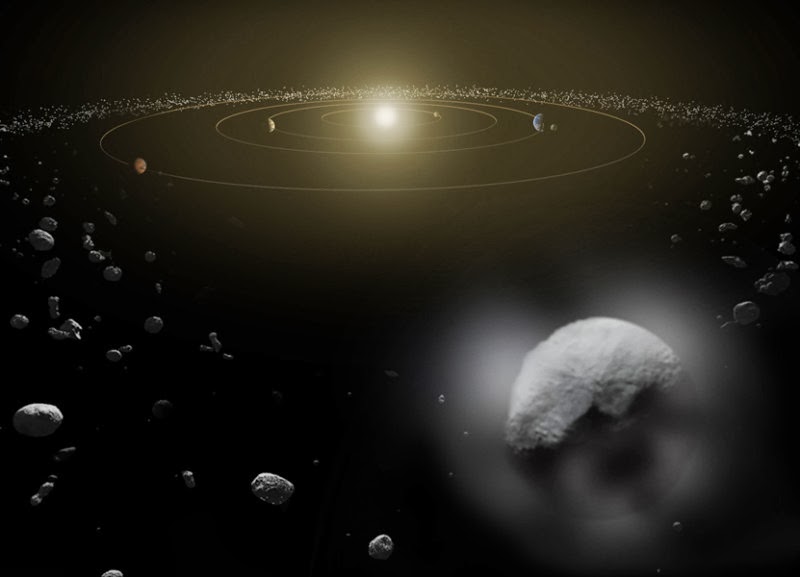 There would seem to be enough water on the Ice Dwarf Planet, Ceres, which orbits in the asteroid belt between Mars and Jupiter, to replace all of the water on Earth. So much for evil aliens attacking us for our water. As everyone knows, they really want to suck our brains out and experiment on cows, leaving crop circles in the American Midwest. (and yes, Mars Attacks, the film, is a documentary)

(NASA/JPL) December 16, 2013- PASADENA, Calif. — Some beauty is revealed only at a second glance. When viewed with the human eye, the giant asteroid Vesta, which was the object of scrutiny by the Dawn spacecraft from 2011 to 2012, is quite unspectacular color-wise. Vesta looks grayish, pitted by a variety of large and small craters.

But scientists at the Max Planck Institute for Solar System Research in Katlenburg-Lindau, Germany, have re-analyzed the images of this giant asteroid obtained by Dawn’s framing camera. They assigned colors to different wavelengths of light and, in the process, revealed in unprecedented detail not only geological structures that are invisible to the naked eye, but also landscapes of incomparable beauty.

Dawn visited Vesta from July 2011 to September 2012. The spacecraft is currently on its way to its second destination, the dwarf planet Ceres.
Plumes of water vapor are thought to shoot up periodically from Ceres when portions of its icy surface warm slightly. Ceres is classified as a dwarf planet, a solar system body bigger than an asteroid and smaller than a planet.

“This is the first time water vapor has been unequivocally detected on Ceres or any other object in the asteroid belt and provides proof that Ceres has an icy surface and an atmosphere,” said Michael Küppers of ESA in Spain, lead author of a paper in the journalNature.

The results come at the right time for NASA’s Dawn mission, which is on its way to Ceres now after spending more than a year orbiting the large asteroid Vesta. Dawn is scheduled to arrive at Ceres in the spring of 2015, where it will take the closest look ever at its surface.

“We’ve got a spacecraft on the way to Ceres, so we don’t have to wait long before getting more context on this intriguing result, right from the source itself,” said Carol Raymond, the deputy principal investigator for Dawn at NASA’s Jet Propulsion Laboratory in Pasadena, Calif. “Dawn will map the geology and chemistry of the surface in high resolution, revealing the processes that drive the outgassing activity.”

For the last century, Ceres was known as the largest asteroid in our solar system. But in 2006, the International Astronomical Union, the governing organization responsible for naming planetary objects, reclassified Ceres as a dwarf planet because of its large size. It is roughly 590 miles (950 kilometers) in diameter. When it first was spotted in 1801, astronomers thought it was a planet orbiting between Mars and Jupiter. Later, other cosmic bodies with similar orbits were found, marking the discovery of our solar system’s main belt of asteroids.

Scientists believe Ceres contains rock in its interior with a thick mantle of ice that, if melted, would amount to more fresh water than is present on all of Earth. The materials making up Ceres likely date from the first few million years of our solar system’s existence and accumulated before the planets formed.
Until now, ice had been theorized to exist on Ceres but had not been detected conclusively. It took Herschel’s far-infrared vision to see, finally, a clear spectral signature of the water vapor. But Herschel did not see water vapor every time it looked. While the telescope spied water vapor four different times, on one occasion there was no signature.
Here is what scientists think is happening: when Ceres swings through the part of its orbit that is closer to the sun, a portion of its icy surface becomes warm enough to cause water vapor to escape in plumes at a rate of about 6 kilograms (13 pounds) per second. When Ceres is in the colder part of its orbit, no water escapes.

“The lines are becoming more and more blurred between comets and asteroids,” said Seungwon Lee of JPL, who helped with the water vapor models along with Paul von Allmen, also of JPL. “We knew before about main belt asteroids that show comet-like activity, but this is the first detection of water vapor in an asteroid-like object.”