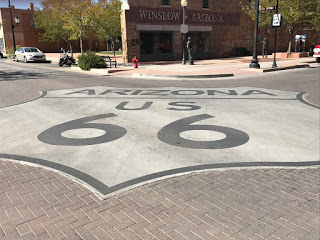 Facebook
Twitter
Pinterest
WhatsApp
Standing on the Corner
You’ve got to take it easy in Winslow. Tourists arrive in Winslow, get their picture taken standing on the corner and then they jump back up on I-40 and move on. The major employer in the city is the state prison.
There’s not much to the place beyond the memorial to the 1972 song “Take it Easy” (Eagles/Jackson Browne).
You can get there from the White Wolf Mine. I ended up there following some unsuccessful scouting of antelope and buffalo hunting in the planes to the south. 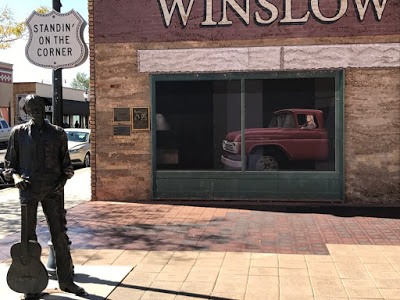 There were a few drunk Indigenous People/Natives there begging hand-outs from belching tourists. Things haven’t changed much over the past hundred and fifty years.
Winslow was established in 1880 and grew as a railroad city. It has seen happier days.
Barringer Crater is 18 miles west of Winslow and you can access it from I-40. It’s 3,900 ft in diameter, and 560 ft deep. It’s one of the things to see when you’re visiting Winslow, but they charge $18.00 to see the big hole in the ground caused by the impact of a nickel-iron meteorite about 150 feet across (50,000 years ago). The Grand Canyon isn’t all that far away and it’s a lot wider and deeper if you’re looking for a big hole in the ground. Some say that the impact at Barringer Crater is the result of an alien spacecraft that lost control on entry through the atmosphere. It never did for Winslow what the aliens did for Roswell, NM. But if you really want to see space aliens you can go to Area 51, or you can watch Hillary Clinton, signing books covered in detail by CNN (Clinton News Network) coverage.