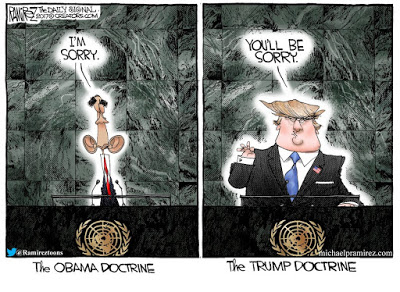 The corrupt, evil, nasty, smug, elite, wicked, lying mainstream media are still trying to cope with the Trump Administration, and the fact that Present Trump was elected by the nation…in the same way that Barack was.
North Korea
The Norks sent out two letters, which I’m not going to reprint here. In one they called on all of the repressed workers in the world to rally to their standard, presumably so that they could oppress them. Sort of the way a beaten spouse leaves home and finds another beater? Even so, I don’t expect that there are many people who are dumb enough to flee to North Korea for sanctuary – with the exception of Dennis Rodman.
With the two letters, North Korea is attempting to counter the international backlash against its nuclear program. That detonation has generated widespread criticism and prompted at least seven countries to downgrade their relations. The North Korean leadership is trying to prevent a snowball effect.
The North Korean assertion that its nuclear weapons are “the nuclear treasured sword of justice” is discordant, considering North Korea’s richly deserved reputation for smuggling, methamphetamine production and distribution, counterfeiting and general disregard for international law and the United Nations. This letter campaign is unlikely to recruit new allies.

Last week Iraqi Kurdistan President Barzani appeared to waffle on whether he would proceed with the referendum today or suspend it. He postponed a press conference on the 23d apparently to give the government time to respond to his invitation for the Baghdad government to make him and the Kurds an offer that would guarantee Kurdish rights without holding a referendum.
In his press conference on Sunday, the 24th, he confirmed the referendum would proceed. He continues to insist that the referendum is intended to enhance his leverage in negotiations with the Iraqi government. That is not what the Kurdish voting population believes.
In Iraq
On 24 September, the Iraqi government asked the Kurdish region to transfer control of international border posts and its international airports. Prime Minister Haider al-Abadi’s office also asked foreign countries to stop oil trading with the region and to deal with the central government as to airports and borders.
In Iran
On 24 September, Iran halted flights to and from Kurdish regions in northern Iraq. Iran also performed a military exercise in northwestern Iran near the border with Iraqi Kurdistan. Iraq and Iran appear to have colluded in a scheme to cut Kurdistan from international travel and commerce. A next step would be to try to cut off international communications.
In Turkey
On 23 September, the Turkish parliament renewed a bill allowing the military to intervene in Iraq and Syria if faced with national security threats. Since August 2016, the Turkish parliament consistently has provided a blank check to Erdogan for handling ‘terrorists” who include the Syrian Kurds.
On the 24th, President Erdogan consulted with Iranian President Rouhani and Iraqi Prime Minister Abassi about the Kurdish referendum. Turkey executed and publicized its air strikes against Kurdistan Workers’ Party (PKK) targets in southeastern Turkey near the Iraqi border, as a show of force for the Iraqi Kurds.
In Syria

Syria’s Kurds are taking the first of three steps that are needed to formalize a governing structure for Syrian Kurdistan. On 22 September, Kurds in northern Syria voted for communal representatives in 3,700 communes.
The leaders elected will then be included in another vote in November to create local councils and one in January to create the Rojava Federal Council whose jurisdiction would include the Syrian Kurdish cantons of Afrin, Jazira, and Kobane and Shaba.
Rojava is the name the Syrian Kurds apply to their de facto semi-autonomous region in northern Syria. The cantons are based on the cantons of Switzerland, which is a federal state.
The Syrian Kurdish leadership is moving quickly to establish a functioning government system while they still enjoy US military protection. They have started at the bottom by establishing local elected administrations. This is the reverse of the process used in most fragmentation/secession movements.
The organizers have taken the time to obtain local buy-in before proceeding to add cantonal and regional government structures. As a result, they can expect overwhelming support, should a referendum on the status of Rojava take place.
In Russia
During a news conference in New York on 22 September, Russian Foreign Minister Lavrov warned that Syria must not be allowed to disintegrate.

“We must first conclude the fight against terrorism, but also start thinking of how to restore Syria’s unity. No partition should be allowed as this will create a chain reaction across the Middle East. This is something that some would want to achieve — those who have an interest in maintaining permanent chaos here,” Lavrov said.

Lavrov also said that coordination between the Russian and US military was essential in fighting terrorism in Syria.

“We have the so-called de-conflicting but I guess that this is probably not enough when it comes to fighting terrorism. When we eliminate terrorist centers in Raqqa and Deir al-Zour, then we are practically talking about a division of labor. In fact, to finish off the terrorists we need not just de-conflicting, we need coordination. However, the American military is not allowed to coordinate,” Lavrov said.

Lavrov’s remarks restate the long-standing Russian policy of opposing a partitioning of Syria. Russia has protected the Kurds in Afrin Canton from Turkish encroachment and has been their advocate for a greater role in a Syrian political settlement. However, they have never supported an independent Syrian Kurdistan. The Russians are less clear about a semi-autonomous Syrian Kurdistan in a federated Syria.
Lavrov’s comment on the need for coordination with the US has been stated repeatedly. We suspect that one reason is that Russia wants to share the costs of fighting terrorists, especially in Syria, where the burden has been significant.
NOTE: The Russian Defense Ministry announced, “The senior member of a group of Russian military advisers, Lieutenant-General V. Asapov was at a command post of the Syrian army, providing help to Syrian commanders in directing the operation for the liberation of the city of Deir al-Zour. As a result of a sudden mortar round from ISIS (Islamic State) fighters, Lieutenant-General Valery Asapov received fatal wounds from the explosion of a mortar shell.” (Or somebody fragged him. We may never know the truth.)
General Asapov is the highest ranking Russian officer to be killed since September 2015, when the Russian expeditionary force arrived.