I’m still working on a pirate book that I started (working title: Quidley’s Secret) and while it’s somewhere shy of half way to completion, work has kept me sufficiently distracted so I’m not pounding away on it. The Research provided some vexing situations since I sincerely try to do a first rate job of portraying people and situations with a high degree of accuracy.
Even though Charles Barry’s ship, Dolphin, is not one of King James II’s own, I am relying on the table of British Navy Food Rations (see right) as a guide to what men at sea would eat in the late 1600’s. The fare was generally standardized as the century prepared to turn for vessels undertaking long voyages, if for no other reason than the health of the crew (and the likelihood that the voyage would be successful and profitable). A sick or lackluster crew could spell disaster at sea where there was no possibility of help if problems arose.
There is also the issue of ships convoying to the New World (from England to Jamaica). Dolphin, a fast schooner rig when schooners were relatively new, was chosen to get critical cargo to market quickly and those who commissioned the commercial venture wouldn’t want it slowed down by other vessels. That was the reason that they chose Dolphin. So they are alone at sea, canvas stretched, trusting to the weather gods that they will be delivered safely to the dangerous and complex Spanish Main.
The line between a merchant ship, a privateer (with a letter of marque) and a royal ship blurred significantly in this time period.
Naval Tradition
There is a family tradition to join the US Navy. My father served in the Navy in the Second World War. My daughter, Heather, married a navy man who was disabled in the line of duty in Afghanistan after they married. His father was navy as well, black shoe, destroyers.  Heather wants to pursue a commission in the US Naval Reserve in the Supply Corps. It’s a reserve billet, and I don’t think that she is planning on more than inactive reserve duty. For now at any rate. She has the education and corporate experience that would support this sort of a move, and she’s still young enough to pull it off. 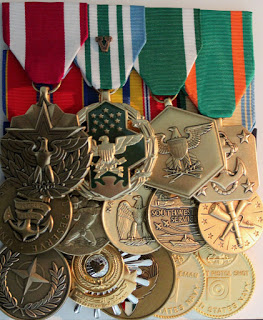 Her husband separated from the Navy for medical reasons and is now a senior person at a US Navy Research facility. So there’s a lot of salt water coursing through that  branch of my family.
Will she earn a stack of gongs, like the old man did (left)? Maybe. Maybe not. But she feels the need to do this and I told her that I’d write letters and if necessary pull strings that I still have leading back to the Pentagon, etc.
I do understand that some this blogs readers served in the Army (America’s senior service) or in the Air Force. Some of you served in the Naval Service (Navy and Marine Corps) as well. There are experiences that one obtains in this sort of service – even in a reserve capacity – that can not be measured with a ruler or counted on a calculator.
And if it’s a war and if she goes in harm’s way – then that’s the way it goes and I’m sure that she will make us all proud. For now, she’s applied. Let’s see where she takes it?