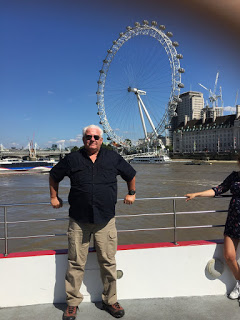 I passed by Lambeth Palace while driving around downtown London on Sunday bank holiday today. I would have gone in, but they charge you if you want to go into the church. I must say that’s more efficient than the way that the parsonage does it in Texas.

It’s something like ten quid to walk inside…my-my-my.  The Archbishop is said to be a pillar of piety and occasionally hands out pennies to the poor when the cameras are rolling. It made me wonder if the archbishop and his apparatchiks ever actually read of the life of Christ in the Bible. I’m not taking a shot at Anglicans, but it did strike me as strange.

There is a certain logic to British-favored sports. Rugby was designed to be played in a mud-wallow and even though it hasn’t rained on me since I’ve been in Old Blighty, it does rain (just not on me). I’m surprised that basketball isn’t more popular here. Basketball was designed to be played by tall Africans — indoors. The Brits have a LOT of Africans and a lot of indoors.

I made a bit of money (all of it had pictures of the Queen on it but it spends) through personal bets on the recent fight between McGregor and Mayweather. At the officer’s club at HMNB Devonport, there were lots of men watching and it only took a few veiled, snide comments directed toward the general “manhood” of the homeland. The Brits had to bet on the hometown boy at his first professional match and I bet on the boxer. No, I didn’t offer odds. This was about national pride. Commodore Shipperley’s Chief Warrant held the betting markers to insure that everyone paid up, as is expected of gentlemen.

There you have it.