The Road to the White Wolf Mine 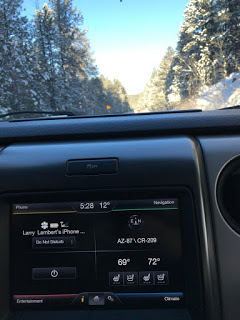 For those of you who follow this blog, you will understand that I undertook to build a shack at the White Wolf Mine in the Central Arizona highlands, south of Flagstaff about two and a half years ago.  January 1, I made the relocation real and am now in the hovel. There is still more stuff to move in, and the place isn’t finished, but I received a certificate of occupancy from the County and that was enough.
Even though I lived and thrived in Southern California as my base of operations and home, California became too much. The cost of living in SoCal is 52% higher than the national average. The weather is nice there…but everything else is just subject to entropy and very high taxes. The progressive agenda didn’t agree with my chosen way of viewing the world. (There are more Republicans in California than any other State – but then again, there are more people.) I’ll still be traveling back and forth to work in the short term.
So I moved on January 1 while the rest of you were hung over from merry making. The high up on top of the Mogollon Rim reached 12 degrees (photo above right). Colder than I’m accustomed to, but you know that I’m a madman. This is the quote from the sidebar (left): 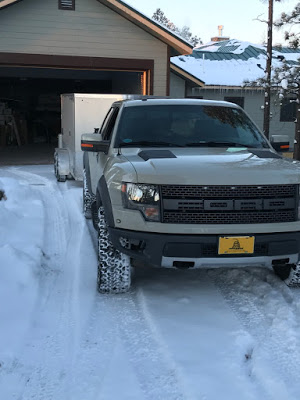 “How do you know I’m mad,” asked Alice

There are two driveways. Both lead to different garage doors. The “front driveway” is a steep slope and was “iffy” in the snow and ice. So I backed the trailer down the long side driveway (nearly flat) and used that option (left).
Yesterday, I set up the bed in the bedroom, warmed a frozen pizza in the oven, and went to bed early – tired. I don’t know if I’ll have time to drop the Ducati (She-Devil) out of the trailer today (Wednesday) or not. I have a lot of running around to do. 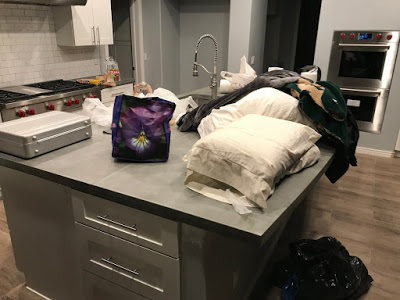 Tomorrow, the work crew will be back on the job, finishing the work that needs finishing. I expect that they’ll be done by April at the current rate. But no matter, I’ve been homeless for the past three months (a shiftless vagabond). I need to set up the gun shop…
I just dropped pillows, blankets, my briefcase, the frozen pizza, etc there on the island in the kitchen. The countertops are poured concrete. You’ll note the Wolf stove and oven and the hole in the wall where the Sub-Zero refrigerator is supposed to be. As to the refrigerator…that’s another detail that needs to be addressed. The spare refrigerator will do (in the garage) in the mean time. I just tossed a bag of frozen burritos on the deck for now. It won’t get above freezing today or tomorrow. I’m a man of simple tastes. I’m keeping a bag of fruit that I bought cold just on a shelf in the garage.
And there you have it.