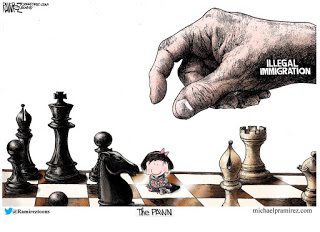 Washington DC – The nation seems to be unable to focus on more than one thing at a time collectively. Today it’s the long standing, court-ordered practice of separating minors (under 18 years) from adult family members facing prosecution. The corrupt, sly, smug, lying, elite media wants to focus all blame on President Trump even though the legislature makes laws.

If we had a border wall, the problem would be moot. People profit from illegal immigration. If you want to know who has blood on their hands, watch for the people who vote against a border wall.

There’s also the continuing bleed going on at the FBI, where their tarnished credibility is being thrashed again for rampant misconduct and outright corruption (referred to as “gifting in exchange for information – can’t call it BRIBERY)
Yawn, more of the same. Nothing surprising in any of this. Gifting the FBI in exchange for information (bribery) was rampant during the Obama Years, and it’s somehow shocking to me that it’s news now.

Summer – Meanwhile, the rest of the world drags on and today, it’s officially summer.

The Solstice brings out the witches, pagans, and what some would refer to as ‘Earth cults’, dancing naked under the stars to celebrate the solstice. Some of the Earth cults are vegans. Yesterday I went to a vegan restaurant for lunch (not because I love animals but because I hate plants) and had hummus with pita bread and cucumbers to dip it. The plate came with kalamata olives, etc. It’s a dish that I like at times. There was a big bru-ha-ha going on in the other corner where various Earth Children were debating whether it was appropriate to sacrifice an animal on solstice or whether you could just eat plants.  I stayed longer than I normally would have at the restaurant because they entertained me with their chatter back and forth (not unlike a freak show/circus), which ended with one side (I’m not sure which one) stomping out of the joint.

Nork Hysteria – Your take on the peace process now underway between almost everyone and North Korea will depend on where you stand. The US is moving forward to produce a framework for denuclearizing North Korea that includes impromptu international inspections. The Norks are going along with this. It breaks a lot of rice bowls but it will make the world safer once North Korea takes concrete, verifiable steps to do that. Kim Jong Un bet the farm on this. If it fails, they’ll tie him to a post and shoot him to pieces with an anti-aircraft gun.

Turkey vs Kurds – Prime Minister Yıldırım said on Monday, 18 June, Turkey would target the Democratic Union Party (PYD) and its armed branch, the People’s Protection Units (YPG), in Kobani, Haseke and Qamishli after operations were completed in Manbij. He said Turkey’s goal was to make northern Syria a safe zone, after the US provided weapons to this terror group.

The green dots signify towns that the YPG liberated with US support. Turkish senior leaders have mentioned all of them as future targets for Turkish “counter-terror” operations.

The Turkish policy line remains unchanged. The political leaders continue to insist that they will cleanse northern Syria of “terrorists,” meaning the Syrian Kurdish soldiers who defeated the Islamic State after the Turkish-backed proxy failed.

Seven years ago, Turkey armed and supported the Islamic State as an ally in Turkey’s policy of overthrowing the Assad government and installing a Sunni Islamist replacement. Turkish leaders still intend to overthrow Assad. The anti-Kurd campaign is related to that Turkish goal.

The recent threats to defeat the Kurds partly are political grandstanding by President Erdogan’s Justice and Development Party to boost its prospects in general elections on 24 June.