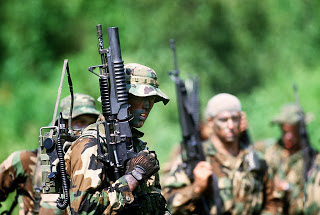 Facebook
Twitter
Pinterest
WhatsApp
Are US Special Forces expanding to assume a domestic role in the US for the purpose of counterterrorist operations?
Yes. Keep reading. And please forgive all the acronyms because this is the military, and the US Government, they are necessary to tell the story.
According to US Special Operations Forces -SOF: Background and Issues for Congress, September 18, 2013 the United States Northern Command (NORTHCOM), located at Peterson Air Force Base, Colorado, will be expanded as the Special Operations Division is expanded from ‘division status’ within the command to it’s own command, SOCNORTH. SOCNORTH will become a Theater Special Operations Command, led by a general officer.

I can’t imagine a reason for a separate Special Operations Command for North America (Canada, US and Mexico). One possible reason is that the SpecOps community wants to create another general officer and to have someplace to stuff senior officers in need of a staff assignment. I keep telling myself that’s why. But that’s not why. On July 31, 2013, Secretary of Defense Hagel held a news briefing to discuss the findings of the Strategic Choices Management Review. While this briefing did not discuss specific actions to be taken as a result of this review, the Secretary of Defense stated that DOD would pursue a 20% reduction of U.S. military billets and government civilian positions in major DOD headquarters, suggesting that USSOCOM headquarters could lose up to 500 of its approximately 2,500 military and civilian personnel.
Special Operations Forces are moving to assume control of the military aspects of counterterrorist operations in the United States. And before you suggest that I’m wearing my tinfoil hat, I’m not.  Not this time anyway.

In addition to Title 10 authorities and responsibilities, USSOCOM has been given additional responsibilities. In the 2004 Unified Command Plan (UCP), USSOCOM was given the responsibility for synchronizing DOD plans against global terrorist networks and, as directed, conducting global operations against those networks. (Source: “Fact Book: United States Special Operations Command,” USSOCOM Public Affairs, February 2013, p. 10)

In this regard, USSOCOM “receives reviews, coordinates and prioritizes all DOD plans that support the global campaign against terror, and then makes recommendations to the Joint Staff regarding force and resource allocations to meet global requirements.”

In October 2008, USSOCOM was designated the DOD proponent for Security Force Assistance (SFA). In this role, USSOCOM will perform a synchronizing function in global training and assistance planning similar to the previously described role of planning against terrorist networks. For more information: CRS Report R41817, Building the Capacity of Partner States Through Security Force
Assistance, by Thomas K. Livingston.
Under the current UCP signed by President Obama in April 2011, USSOCOM is tasked in accordance
with Title 10 U.S.C. 167 to serve as a global Special Operations Forces (SOF) provider with the inherent responsibility to coordinate global SOF operations with the Services, Combatant Commanders, the Joint Staff, and the Office of the Secretary of Defense (OSD).
The current UCP stipulates that the USSOCOM Commander is only responsible for synchronizing planning for global operations to combat terrorist networks. This limits USSOCOM’s ability to conduct activities designed to deter emerging threats, build relationships with foreign militaries, and potentially develop greater access to foreign militaries.
USSOCOM is proposing changes which would, in addition to its current responsibilities, include the responsibility for deploying and, when directed, employing SOF globally (including operations within the United States) with the approval of the GCCs. USSOCOM noted that the Chairman of the Joint Chiefs of Staff (CJCS) approved USSOCOM’s proposed UCP changes and these changes will be included in the next round of formal changes that President Obama is expected to approve later this year.
The question that this blogger posits is the definition of “terrorist”. Under the Obama Administration we’ve seen that definition blur from “radical islam” to people who don’t agree with the “fundamental changes that Obama is making to America.” While you can make of that what you will, the expansion of SOF to North America and the changes in the law invoke a certain concern. I am not suggesting that the US military is poised to attack American citizens who simply disagree with Obama — but we have seen that with the Internal Revenue Service, the Environmental Protection Agency, the expansion of National Security Agency operations to American citizens inside of the US, etc.