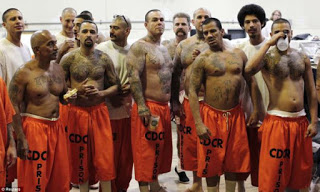 Facebook
Twitter
Pinterest
WhatsApp
The move by the Obama Administration to release tens of thousands of hardened criminals onto the street is hailed by the liberal left as being “the right move”. As I have suggested before, it works for the police, who are guaranteed more overtime as they clean up the carnage.

Punishment used to take the form of public shaming (putting people into stocks in the public square, public flogging, etc.). More on the order of spanking for adults. Today it’s taken the form of long prison sentences as three-strikes laws have created a much safer society in America by warehousing the segment of society that is too broken to co-exist.
At the same time, it’s created a public expense as large numbers of govt. employees are given the job of watching, feeding (and coddling) criminals who live in large concrete boxes.
The liberal elite can afford to pay for private security measures which include their own armed guards to protect them from the people that they are so happy to see released from custody. Having your own guards means that you don’t need to personally own a gun, so depriving the common man of his defense against threats bares a twisted logic that doesn’t work in fly-over country.
America’s children are most frequently abused where alcohol/drugs are abused in a home. In a family where both parents are present, don’t abuse substances, and a loving, nurturing environment is present, the offspring of that environment is far less likely to end up guarded inside a concrete box. If that’s the case, why isn’t the American effort to reduce prison populations focused on those things that will encourage healthy families?
Husbandless mothers/fatherless children are not doomed, but when you look at the odds, that’s where the ranks of the imprisoned spring from. 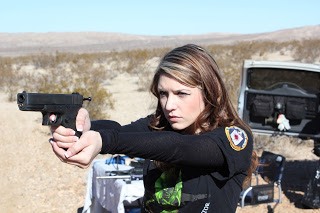 What about the rest of us? What part do we play in this human drama? Shakespeare said that, “All the world’s a stage” and that we are each actors playing our part.

My daughter (pictured left) is exercising her right to keep and bare arms and to practice with the same. Is a Glock 21 (.45 ACP) too much handgun for a young woman? Apparently not.

There is a saying from the Old West that God made men and Samuel Colt made them equal. When you consider the practice of releasing tens of thousands of angry, violent men from their cages onto the population, the concept of equality for women comes into focus. That can only be achieved through ownership and familiarity with firearms. The liberal elite in Washington DC, who surround themselves with heavily armed bodyguards don’t agree with me.