US Position on Iran 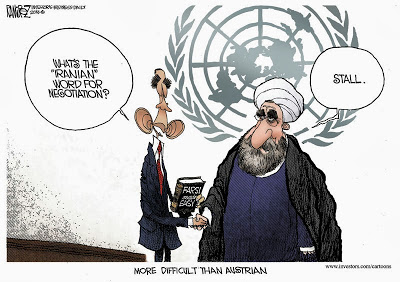 I have no idea what the Obama Whitehouse’s position on Iran is. What is more to the point, they don’t seem to know either. Yes, I understand that if they had a position (or red line), it would move depending on the polls.
Hate him or love him, even Bill Clinton had a position on most things. He surrounded himself with people who had ability and vision and he listened to them. Obama is on his fifth White House Chief of Staff and there has been a game of musical chairs with the insiders there because the experts are required to listen to Obama. Yes, I understand that when you’re a narcissist, everyone should listen to you even though your ONLY life experience is as a Chicago community organizer.
George W. Bush (love him or hate him) let people know where he stood and the world trembled. Vladimir Putin does the same thing and Obama trembles.
Will Iran complete its nuclear weapons with the USA sitting on the sidelines? I doubt it. Israel will hit them before that happens whether or not the US is onboard. In fact, if I was Israel, I don’t know that I’d share my war strategy with the US — because I frankly don’t know whether or not Obama would go to Iran with the information.
I’m not sure what passes for Strategy in the Obama White House, though the recent exercise with Syria over chemical weapons provides me a rather clear road map.