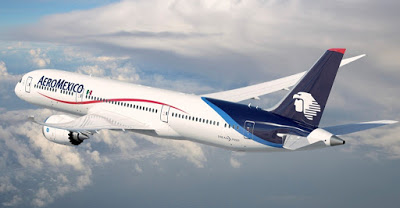 Facebook
Twitter
Pinterest
WhatsApp
Aero Mexico’s fleet of commercial aircraft (sometimes referred to as “the great piñatas in the sky”) are not all that bad and first class service on their fleet of 737’s is on par with other airlines flying similar distances with similar aircraft. Stumbling through life as I usually do, I accidentally found that they have a Boeing 787 that flies between Tijuana and Mexico City in a mid-morning flight schedule.
Let me share with you that there is a world of difference in comfort between the venerable 737 and the lie-flat capable seats in the first class compartment on a 787. I don’t know how many of you who read this blog commute between Tijuana and Mexico City (if you do, you’ve never waved or said hello)…BUT if you’re going to do it, relaxing in first class on a 787 is vastly better.
Some of you are chuckling to yourselves – “This is your FIRST flight on a 787, LL? Where have you been?” Obviously I haven’t been at the right place at the right time. First class on a 747 is always very nice, but it’s a big, long haul aircraft and they don’t use them for the more local runs. I haven’t flown in first class on an Airbus A380  (they do land at LAX) and am told that you can take a shower and they’ll schedule you for a massage in flight. The three hour flight between TJ and Mexico City doesn’t justify a shower, and a massage. I wouldn’t turn it down, but — you get my point. 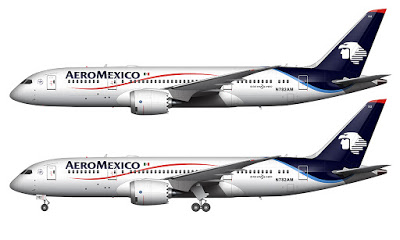 For a mid-size aircraft, that Dreamliner is one nice ride.
The first class menu on the Aero Mexico 787 is the same as the AM 737…What’s that about? I had hopes of a freshly bar-b-qued ribeye, and enchilada. Maybe cherries jubilee served au flambé to put a nice finish on the meal, but it was not to be.
Mission: From here on out, I’ll scour the flight schedules and make sure that I’m flying in first class on the NICE BUS, rather than the smaller and more confined cabin of the 737 (short bus). After all, the price is the same.

Commentary: It’s much easier for me to cross the border at CBX,  and take a domestic flight from TJ to Mexico City than it is to take an international flight from the US to Mexico City. Even though I have Global Entry, SENTRI and every other known and unknown expedited pass to get from and through, it’s easier.

Mexico’s TSA isn’t made up of hardcore unemployables from the inner cities, ex-cons, and fugitives. Some believe that it helps account for shorter lines at security and far more polite screening…

Statistically, Tijuana is safer than Chicago*, Detroit, Newark or Baltimore (the US cities are all machine political cities run by the Democrat Party for generations). Tijuana is run by the Arellano Felix Drug Cartel. Does the cartel represent a more enlightened management style than the Democrats do, or are they on par with each other? I leave it for you to decide.

*The current murder rate is roughly double on Chicago’s south side what it is in all of Juarez and Tijuana Mexico combined.