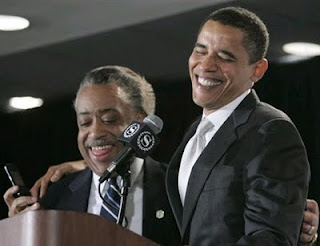 How can you make hatred (particularly racial hatred) institutionalized and acceptable. The Klu Klux Klan did it in portions of the South and of course in the State of West Virginia, where Senator Robert Byrd (a Democrat and ranking Senator in the US Senate) served as Exalted Cyclops.

He (Senator Byrd) said he had joined the Klan because he felt it offered excitement and was anti-communist.However, in 1946 or 1947 he wrote a letter to a Grand Wizard stating, “The Klan is needed today as never before and I am anxious to see its rebirth here in West Virginia and in every state in the nation.” (Wikipedia)

I suspect it’s ok for a Democrat, particularly a powerful (though presently senile) Democrat to serve despite his violent racist background.

But we’re talking about Black Liberation Theology, the faith of Barack Hussein Obama (when he’s not being a Black Muslim) here, not the racist Klan – aren’t we?

Yes and no, we’re talking about legitimizing racial hatred through institutionalized religion – – time to discuss the black version of the KKK – which is also the faith of the Reverend Jessie Jackson (famous professional racial agitator).

How and what does the President of the United States worship:

According to James H. Cone (CLICK HERE) who developed what would be called Black Liberation Theology (CLICK HERE) it came out of the “need for black people to define the scope and meaning of black existence in a white society”, and emerged in the last two decades in the wave of liberation movements as an expression of “black consciousness”. (Wikipedia)

Does that smack of racism to you? Just a little?

All religion has some ties to salvation – and vindication of right and wrong, doesn’t it? Certainly Christianity does as does Islam, Buddhism, Hinduism, etc. How is this central concept handled in Black Liberation Theology – the “christian” faith of Barack Hussein Obama and his mentor, Dr. Jeremiah Wright?

Salvation is freedom from the oppression and pertains to blacks in this life. Proponents of black theology are concerned specifically with the political and theological aspects of salvation more than the spiritual. In other words, salvation is physically liberation from white oppression, or “The white enemy” (Cone) rather than freedom from the sinful nature and acts of each individual person. Presenting heaven as a reward for following Christ is seen as an attempt to dissuade blacks from the goal of real liberation of their whole persons. (Wikipedia)

Do you see anything that smacks of racial hatred there? Barack Hussein Obama attended a church that preached this as its principal doctrine for over twenty years.

Surely since Barack Hussein Obama is a follower of Jesus Christ, his faith would deal with issues pertaining to Christ, wouldn’t it?

Jesus is seen as a non-white, social liberator who focused on the emancipation of the poor and of the marginalized, and many parallel are made with the emancipation efforts of black people in the United States. Christ’s message is interpreted as encouraging “black power” (Henry). His intrinsic nature and spiritual activity receive little or no attention. Some even deny his role as the atoning sacrifice for the world’s sins and provider of eternal life (Shrine).

To read more about the beliefs of Black Liberation Theology – and to better understand the alleged faith of President Barack Hussein Obama, check out these books at your local library (I wouldn’t pay for them).

*Hopkins, Dwight N. Down, Up and Over: Slave Religion and Black Theology, Minneapolis: Fortress Press, 2000


Black Liberation Theology teaches hatred of white people on the basis of RACE ALONE. The only plank on which it stands is that simple guiding principal. If you don’t believe me, explore the faith for yourself. I gave preference to the works of James Cone (above) since Rev. Jeremiah Wright, President Obama’s pastor, mentor, teacher and counsellor (for 20 years) said that “Cone’s writings forms a cornerstone of my faith.” (Wright)