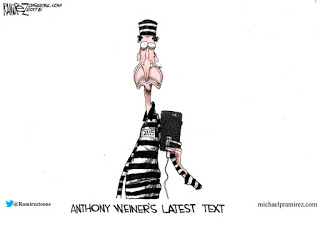 I wonder what Weiner’s cell mate will think – being paired/coupled with Anthony Weiner (aka Carlos Danger), in prison? Will they steal his chow in the mess hall? Will they take selfies with him? Is there an arrow in cupid’s bow? Will Weiner end up shaving himself completely and start walking like a duck to please the other inmates? He did run for Mayor of New York City. Maybe they’ll respect him for that?
The conviction means that he will not run for the presidency with former Attorney General Eric Holder, a perjurer. Team WEINER-HOLDER will never grace the American political landscape as the darlings of the progressive left.

And what of Huma Weiner? She’d been Hillary’s lesbian lover for a long time. Her divorce from Anthony and her separation from Hillary leaves her available and ‘on the market’. Nobody seems to know which way she’ll swing now that she’s out and about. And at this point, nobody cares. Maybe her family in the Muslim Brotherhood will take her back to her homeland and stick her under a black tent/burka?
Heroes and Scoundrels 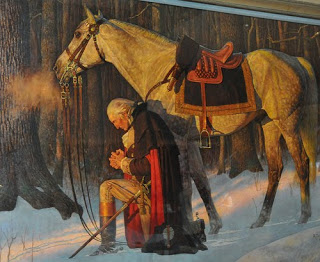 Dastardly politicians have strived to weaken the nation for their own benefit. It was true in Washington’s time too, so things have changed but not as much as we’d like to think. Nowhere is this more evident than in the struggle of Democrats to get illegal aliens (who tend to vote for them) into the country at all costs.

Tearing everything down and replacing the “Old Constitution” with a new one of their devising is the aim of the progressive movement. And it’s all about power – and wealth – and votes, because the best way for a politician to get votes is to take your wealth and give it to somebody else. It was the aim of President Johnson’s “Great Society”, which crashed and burned on the pages of history. Crashing and burning isn’t a tragedy to progressives no how many people are hurt, because in the ashes of crisis arise ‘opportunity’. Such is the case of Obamacare, as another example.

Voting other people your money is how the program works these days – a program that Jefferson, Madison and Washington never envisioned.

And the Democrat Party is outraged and deeply wounded that despite their control of the corrupt, wicked, elite, smug, lying mainstream media, the Republicans control both houses of Congress and the Executive Branch of government. How can this happen?

The GOP is only slightly less corrupt than the Democrats – but they are certainly no angels.

Bloomberg reports that Governor Jerry Brown is working on legislation that would ban fossil fuel powered vehicles in California. You can read the article for yourself.

Mary Nichols, head of California’s Air Resources Board, said “I’ve gotten messages from the governor asking, ‘Why haven’t we done something already?'” she said, adding that Brown is particularly worried that his planet-saving efforts might be outshined by those of other countries.

The United Kingdom and France have both said they will ban the sale of gas and diesel by 2040. Norway’s transportation plan calls for all new passenger vehicles to be zero-emission by 2025. India wants to make the switch to electric by 2030.

But it’s the People’s Republic of China, currently drafting its own ill-defined ban on the production and sale of fossil-fuel-powered vehicles, that is giving Brown the most grief.

Says Nichols, “The governor has certainly indicated an interest in why China can do this and not California.”

Apart from envying the autocratic powers of a communist dictatorship, Brown has not said what a ban on gas and diesel vehicles might look like. Nichols herself offers scant detail, other than saying that a complete ban on the sale of new combustion-powered vehicles could arrive as early as 2030 and that all combustion would have to be phased out by as early as 2040.
The popularity of zero-emission vehicles (ZEVs) is part of Governor Brown’s problem. Despite generous subsidies, purchases of ZEVs still hover below 3 percent of new vehicles sales. Only 13,804 were sold in California in the first quarter of 2017, out of 506,745 in total new vehicle sales.
Only 300,000 “clean vehicles,” of which roughly half are partially gas-powered hybrids, have been sold in California. Purely electric vehicles are about .4 percent of the nearly 35 million registered vehicles on the state’s roads.

To achieve Brown’s goals, he will have to compel 99.6 percent of California drivers to trade in their gas guzzlers for electric vehicles that they currently find too expensive or too impractical. And that doesn’t even touch on the issue of providing enough charging stations for these vehicles, or of generating enough electricity to power those stations.
Nor does it cover the issue of affordability. Right now, electric cars are the domain of the well-to-do. A 2016 Berkeley study found that 83 percent of those making use of California’s electric vehicle subsidy program made over $100,000.
California has a the highest poverty rate in the US. There is a vast disparity between rich and poor as the middle class have been squeezed to pay for everything. I expect that there will be some sort of program for the middle class to pay for “electric cars for illegal aliens” or something along that line. Don’t laugh. I’m not kidding.