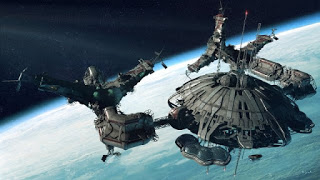 “Every man, wherever he goes, is encompassed by a cloud of comforting convictions,
which move with him like a cloud of flies on a summer’s day.” — Bertrand Russell

The Plaran base in geosynchronous orbit around Earth serves as one of many outpost stations that the Empire established to secure its  territorial interests. In addition to military concerns, the Plaran Empire’s development team seeded Earth with human beings, who were very compatible with the native ecology. Humans descended from aquatic ancestry on a planet one hundred fifty-seven light years from Earth whereas the native Neanderthals descended from the African continent. The DNA of both human and Neanderthal is close enough that they can genetically intermix. The Plarans can not explain this genetic similarity. Their expansion into this quadrant of the galaxy is recent and the history of exploration and planetary seeding precedes their experience. As their opponents retreat, they advance.

Notwithstanding that advance, matters on the Earth outpost move slowly. After, nearly five-hundred years on the station, Din March’s interest over the success of the humans in the seashore region approaches an obsession. Absent warfare, there is little else to keep the long-lived Plaran staff’s attention. They have bumped several asteroids out of a collision path with their pet planet, but those don’t come along every day. News from home and of the progress of the war is routine.

Din March, Expeditionary Base Commander, indulges his hobby of building ancient weapons with a twist, with the humans who live on the seashore in mind. There is no prime directive that they avoid contact with the locals. Most Plarans would not bother. There is no need to. Din and his deputy, Frei Wrenet simply exercise their hobby.

Plarans are bipedal, breathe oxygen and are flesh and blood, but they are not remotely human. Din’s unusual interest in the humans vaguely reminds us of a human male of much later millennia tinkering with a train set in his basement.

Frei Wrenet recorded the pleas of Rog, the village priest. She had a monitor peering out from the eyes of the idol in the priest’s cave, which served as his holy retreat, and an office of sorts. Rog had concerns about raiders along the coast. The monitors had recorded  movements  of that particular band for over a week now, but the coastal raiders were not the threat that concerned Frei Wrenet. She shared her thoughts with Din March, her friend and commander. He would make the call.

They’d put considerable effort developing and protecting not only the village but the surrounding area and it was in danger of being overwhelmed and destroyed. That would not do.
Din March, himself, gave Tor’s great grandfather the copper hammer. He took some humor from the title that they’d given him, “Shimmering God”. The Plarans would live for a millennium or more while The People who occupied the village seldom lived past fifty. People outside of the Empire would view a body shield as a ‘shimmer’, so the title made some sense. Though he tried to explain to Tor’s great grandfather that the shimmer was not ‘magic’, his efforts proved unsuccessful. Din March displayed his kinship to the people. He ate fish and flesh with them, and showed them how to kill oxen and mammoths with flint-tipped spears. He cheated when he demonstrated with an old tusker, striking the impressive old bull with an infrared laser seconds before administering a killing blow with the spear.
Frei Wrenet showed the large, foraging Neanderthal army to Din March. They came from the east, destroying all before them. They had been displaced themselves, but their diaspora gained momentum and they were within easy striking distance from the village and from all of the villages that bordered the sea. The ocean would stop them, but not before it wiped out all of The People.  The Neanderthal numbers had reached to over seven hundred and they heaped their belonging on travois pulled by mastodons. The sight of such an army, impelled by fear of their own extinction would strike terror in the villagers, who had no frame of reference for such a threat.
“I have fashioned a new hammer for Tor,” Din March boasted. We will need to put a controller into his body to make it work. It will extend his life by a factor four or five times, eliminating pathogens and providing better processing of nutrients. It will also expand his capacity to process information.

“Then you will give him body shield technology?”

“Yes, but limited to the threats that he is likely to face. It won’t save him from drowning in hot volcanic ash or anything like that.”

“They are twins, and if you are doing that for Tor, I want to do something special for Rog.”

“What do you have in mind?”

“I want to bring him up here, let him see his world and give him a greater perspective. Perhaps we can give him a chip as well that will help with abstract thought rather than using it as a weapons management system?”

“If we are doing for Tor, I see no problem with giving the shaman an edge of his own. I haven’t told you, but we have orders to depart orbit soon and join with the fleet in a move against massing forces at Tau Ceti. It is unlikely that we will return. This can be our parting gift.”

Din continued, “The first thing that we must do is unite the various bands of people in the region and gather them together so that they can witness Tor and Rog deal with the threat to them all. Send ten Walkir down there in heavy armor to all of them including the group planning on attacking Tor’s village and have them meet on top of the round bluff east of the village in five days time. By then the Neanderthals will be approaching and we can see the deed done.” 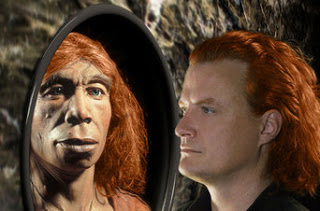 The Neanderthals in this band are substantially the last of their kind. They consist of 300 males and about 200 females with the remainder of their numbers being comprised adolescents and infants. They’d been pushed and pushed by humans who have spread across the landscape, multiplying in great numbers, virtually unchecked. The Neanderthals resolved not to be pushed again. Now they will do the pushing.

In a battle to become the dominant alpha species  they are poised to rebound. They have concentrated, formed an army, and their natural advantages in strength and cunning gives them an edge. They also have an overwhelming advantage in bringing numbers to bear at the point of contact. The Neanderthal army will kill the human men, mate with the women and absorb the fertile coastal region. Even though they now operate on instinct rather than geographic knowledge, those instincts are correct. The only question is who has the greater God backing their play. The Neanderthals have Mog, the great God of the, the Sun, the harvest and the feast. His standard, consisting of a massive oxen head perched atop a sapling leads them, colorful feathers hanging from the horns. The Plaran Empire backs the humans.

Concluded with part three, A Hammer.