plata o plomo (Your Sunday Sermonette) and “The Brothers” 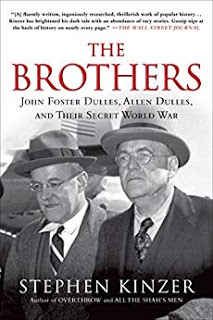 Plata o plomo is a Colombian Spanish slang phrase that translates to “silver or lead.” A person saying the phrase is telling the listener to either accept a bribe (plata, meaning “silver,” a common slang term for money in Colombia) or lose their life (plomo, a metonym for “lead bullet”).
un billetico If you’ve ever spent some time in a Spanish speaking country, there’s a good chance you’ll know the word billete, or ticket. In Colombia, and more specifically in the world of the narcos, un billete is a large amount of money, and un billetico is a really large amount of money.
In context:
— “Se ganó un billetico con esa vuelta.”
Corruption, and the Deep State in the Age of Trump
The reality is that there are levels of corruption in every large business and in every level of government to some degree. There are things that even the most honest organs of the state live with because they seem to be necessary. And leaders don’t want people working for them who are ‘cleaner’ than they are because that’s dangerous. So they buffer themselves with like-minded people and keep the ‘cleaner’ people at lower levels, beyond a certain level of decision making. I’ve been there, friends. I know the ups and downs. And there comes a point in time when the filth won’t come out from under your fingernails. You can tell a lot of Washington insiders by that dirt.

And while you may have read that I’m not overly proud of the FBI and that’s true. There was a guy who I worked with every day for five years, FBI guy, and we did some sensitive stuff. We also had fun. I remember once at the Hard Rock Cafe in Vegas when a snowflake came in with a SEAL Team Two patch on his shabby jacket and I had a few under my belt, so I took out my clasp knife, tossed him on the floor and cut the patch off before my buddy could pull me off of the terrified Hard Rock customer. No flesh came away with the patch. I showed remarkable restraint. Vegas Metro showed up, we buzzed them, they left, nothing to see here. Anyway, he rose to be Deputy Director over the Narcotics and Enterprise Crime (Organized Crime) Division. Then he tossed it away, transferred out and ended up as Special Agent-in-Charge of the Sacramento RA until he had enough time in and enough money in the thrift fund to retire. Sometimes, you need to walk away from the swamp. Nietzsche said that when you look into the abyss too long, the abyss also looks back into you. The same could be said of the swamp.

But I digress. The war stories could go on for weeks.

CIA was born in 1947 as a child of the Cold War to fight the Soviet enemy. That’s really all there was that mattered. The Russians moved slowly and the Americans moved slowly as the respective bureaucracies churned. For the US, the academics from old school tie/ivy league ran a gentleman’s business primarily under State Department/diplomatic cover. Sure, there are knuckle draggers in the Special Activities Division and paramilitary ops but you’re not going to rise in the corporation from those beginnings.

The Deep State that we see today truly had its genesis and its bloom under Allen Welsh Dulles, an American diplomat and lawyer who became the first civilian Director of the Central Intelligence Agency. His older brother, John Foster Dulles, was the Secretary of State during the Eisenhower Administration and is the namesake of Dulles Airport.

The FBI was a child of J. Edgar Hoover, a corrupt, closet homosexual whose stock in trade was political extortion inside the Washington DC Beltway.

It doesn’t matter how your consciences lets you slice it, those facts are not in dispute. And the children of those fathers now pull the strings of power. We’ve all seen it play out first hand when Hillary Clinton, infinitely corrupt and wicked, didn’t win. And President Trump only wanted to Make America Great Again. They couldn’t corrupt Trump with money or women or power and he wasn’t willing to read what had been written for him by his handlers from a teleprompter.

When ‘plato o plomo’ was offered to President Trump, he laughed. Speaker Paul Ryan (running mate to Mitt [Pierre Delicto] Romney) tried to explain how things worked several times and the president ignored him. So the machine ground against President Trump, who had been surrounded by the machine the moment he took office.  The corrupt, lying, filthy, sly mainstream media, the core Democrats and the core Republicans all lined up to remove him from office. The selected vehicle was “Russia” – the boogeyman of the Cold War. And it still is. Just turn on the news. Except that there is no more Soviet Union, and the Russian Federation, a fraction if its former size and strength is a regional power with nuclear weapons and a GDP that is smaller than that of Texas. However, none of that matters to the Deep State because China pays to play, so that just leaves Russia.

And America had been brainwashed to fear Russia. The Military Industrial Complex saw to it that we were, because it justified massive budgets and enormous profits… and constant proxy wars. Because as General S. D. Butler, USMC reminds us, “War is a racket“.

If you offered corrupt old Slow Joe Biden plato o plomo, he’d take the silver – from China, from Ukraine, from anywhere, just the way that Hillary Clinton and the Clinton Global Initiative did.  Just the way that the Bush Dynasty did and the way that Barack Obama went from being broke when he entered the White House to a billionaire in eight years. Because that’s what America has become under the rule of this filthy machine. un billetico