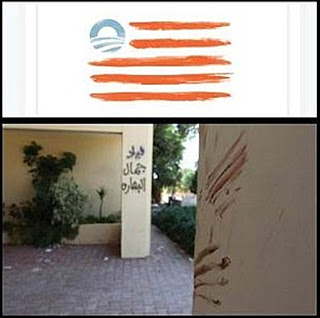 Facebook
Twitter
Pinterest
WhatsApp
In the military, officers are trained to seek responsibility and to take responsibility for their actions. The Commander-in-Chief was never in the military. During those years when many young men serve their country, the boss lived a carefree life on somebody else’s dime, specializing in buggary, dope and hanging out on campus.
Thus when we hear about scandal after scandal (all but ignored by the mainstream media – with very few exceptions, branded as pariahs by the Obama Administration), there has never been one single shred of responsibility or accountability.

“We go to Dover to see bodies, and we’re all in the hangar down there,” Charles Strange, father of slain SEAL Michael Strange, recalled. “And President Obama comes up to me and he says, ‘Mr. Strange’ — and he grabs me by the shoulders — ‘Michael changed the way America lives.’ I grabbed Mr. President by the shoulders and I said: ‘I don’t need to know about my son. I need to know what happened, Mr. President.'”

Charles Strange says the president told him. “Mr. Strange, we’re going to look into this very, very, very deep.” Since then, Strange says, “I haven’t heard nothing.”

Who is responsible for the Benghazi Massacre? Because the deaths didn’t have to be.

The Benghazi investigation hasn’t focused on WHY Ambassador Stevens was at the consulate (the one with the giant hole in the wall from a bomb that detonated a week earlier) with Sean Smith, an information officer, not a DSS Agent. We can’t ask the Ambassador or Sean Smith because they’re dead. Does it make sense for Stevens to travel to Benghazi with essentially no security?
Let’s review the run up to September 11, 2012 — and keep in mind that Stevens was EXPERIENCED in Libya. He spoke the language and understood the culture. This is the background. Would any of you have traveled to Benghazi, to an insecure compound without a security escort? There were a number of well qualified former US Special Forces at Tripoli who could have accompanied Ambassador Stevens but none of them did. What would they have been witness to if they’d gone along?
Why was J. Christopher Stevens there at the Consulate with one aid (unarmed) given this situation? What did Secretary Hillary Clinton send him there to do? And why did Secretary Clinton stand down any effort to rescue Ambassador Stevens? We know that there were both Army and Air Force units that could have responded. We know that they had a drone overhead watching and we know that we didn’t do anything but watch people die.
The CIA knew what was going on at the Consulate and didn’t want ANYTHING to do with it — well above and beyond the attack.
President Obama promised to look into it and LIED to the American people, blaming an Internet video rather than al Qaeda. Was Ambassador Stevens doing something there in Benghazi that would have caused a bigger scandal if his mission leaked?
Don’t blame Bush…