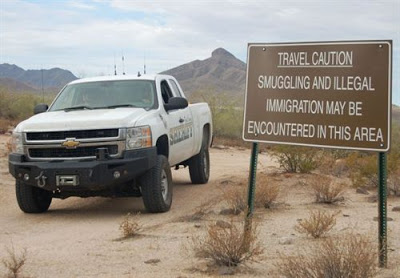 Facebook
Twitter
Pinterest
WhatsApp
There’s enough stock photography to give children bad dreams for a century so I’m not going to play shock jock here on this blog simply to pander to those baser voyeuristic impulses. However, want to make a point here. A couple of days ago, (LINK) the bodies of 28 murdered people were found in Acapulco, Mexico. Of the 28, fifteen had been decapitated.

This sign is due diligence on the part of your United States Government to warn you not
to travel through this part of the country. Note, they’re not stopping illegal immigration and
smuggling, just warning you that it’s happening here (in Arizona).
It made news because the bodies were found in Acapulco outside the Plaza Sendero shopping mall. It would not have made news if they had been found in Los Mochis, for example, because murdered bodies in those numbers are a daily event there, in Juarez and a number of garden spots in Mexico. Last November the bodies of eighteen men were found in a mass grave outside of Acapulco. They’d been abducted from the downtown area.
The New York Times reported (above) that it only happens in a handful of states in Mexico. That would be news to many Mexicans, but the mainstream media has to learn about the stories in order to report them. In Mexico, the local media is often afraid to report what the learn because their friends in the business have ended up headless — their families left to fend for themselves as best they could. 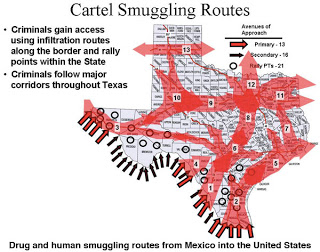 The bodies in Acapulco belonged to a faction of the Beltran Leyva Cartel that followed Edgar Valdez Villareal (La Barbie). When the Mexican government arrested La Barbie, the cartel tried to include the break-away faction back into the organization. Recently, Hector Beltran Leyva (who now runs the show) found out that this remaining cell had betrayed him to the Sinaloa Federation (cartel).
These Mexican Drug Cartels exist to traffic narcotics within the United States. In order to get drugs from Mexico into the US, they need to cross a border. Forgive me if I’m making this sound too simple, even if it is.
The assertions made by the Obama Administration that they are doing something about Border security is hot air – smoke and mirrors. And the sort of violence and unrestrained organized warfare that exists in Mexico is coming north. Phoenix, Arizona has the second highest kidnapping rate of any city in the WORLD. Guess who does the kidnapping?

I’ve heard from the Obama Administration, and Secretary of Homeland Security Napolitano
has assured me that the Border is safe. That’s why they suggest that Americans
don’t travel through portions of their own country — because it’s controlled
by drug lords from Mexico.
It’s not about ethnicity and it’s not about poor people coming North in search of a better life. It’s about CLOSING the borders with the exception of authorized crossing points and authorizing lethal force to do so. Call me a radical, but I don’t want the sort of unrestrained gang warfare we are seeing in Mexico bleeding across the border into the US.