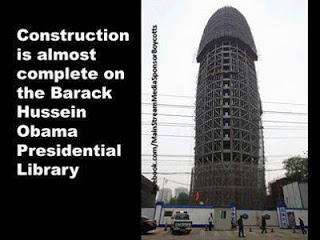 As the edifice to Obama’s presidency continues to be take shape, the haters and racists who live near the library and apparently didn’t feel as if Obama deserved a monument to himself are simply being swept aside. “I intend to fundamentally transform the landscape around my library,” President Obama has continually said. The glorious pylon  to Obama’s ascendency and to his everlasting memory will be completed by the time he leaves office in 2016.
As I understand it, the presidential library will contain his golf memorabilia, a pavilion dedicated to photos of vacations that he has taken while in office, the famous Nobel Peace Prize interactive display that explains what he did to earn it — and the historic legacy of ObamaCare. The President doesn’t want a Benghazi Room or the Fast and Furious Display detailing those particular triumphs. Neither will there be a section on the effective us of the IRS and EPA against his political opponents — but there will be an enemies list, and I hope my name is near the tip.
Over 2,000 square feet of empty floorspace at the center of the shaft/library is being reserved for the President’s glorious victory in Syria.

There is a movement to honor planned parenthood by draping the skyscraper with a latex sheath and both Trojan and Sheik are bidding on who will win the contract. Each has a different approach. Trojan has a picture of Barack wearing armor with the slogan, “The preference of the Greek Warrior” underneath. Sheik has Barack wearing traditional his Muslim dress (see left).
The question remains whether the latex drape will be painted flat black, chocolate brown or a the latte color that Michelle Obama favors.
President Obama wanted two geodesic domes placed at the base of his library to serve as a gateway to the tower-of-power (as it’s being called). The architects pointed out that putting two large balls there (also draped in a latex sack) wouldn’t be at all life like, and the President conceded that was the case and withdrew his request.
The top floor of the library will, be a mosque. It goes without saying. 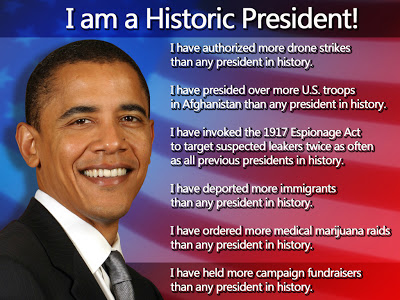 I have not yet been contacted by Team Obama to be one of his official biographers, but I’m working on a draft treatment of the subject.  The cover art will be a rendering of the presidential library (tower of power), pictured above.

Since I’m not a terrorist the way his buddy Bill Ayers is/was, it’s unlikely that my manuscript will be accepted and that I’ll make the talk show circuit, touting my new book. I doubt that it will even make the shelves in the Barack Hussein Obama Presidential Library’s gift shop. Team Obama really has no concept of quality journalism when they see it.
The book, Obama: Hope, Change and Triumph would be a collection of my blog posts…and even though they may never be sold in Obama’s gift shop, they will be available in the National Security Agency’s Archive for all time. So at least there is that. Thanks Barack for thinking of me.