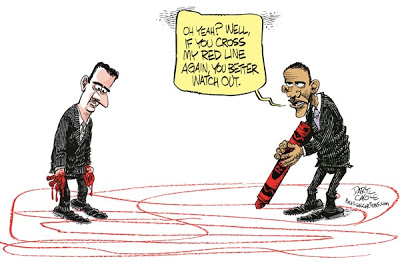 Facebook
Twitter
Pinterest
WhatsApp
Will the nation back al Qaeda in Syria or not? On the eve of 9/11, a date that echoes in American history, an American President is contemplating throwing the nation into combat on the side of the same people who blew up the World Trade Center. 12 years ago, the public would have stormed the White house with staves, torches and pitch forks and would have hung ANY president who suggested that from the nearest light pole.
Today Congress actually considers the matter. That’s how far we’ve fallen.

(Krauthammer) “Look this isn’t a sudden stroke of constitutionalism, this is simply expediency and delay,” he continued. “The problem is not that he’s not selling his strategy, it’s that he doesn’t have a strategy, and that’s the reason everybody left, right and center has no idea what he’s doing. He zig-zags left and right, he telegraphs he’s going to strike, he does nothing, he calls in the Congress and then he goes off and plays golf, when his secretary of state had given a speech a day before with remarkable urgency and passion.”

Elections have consequences. We’d be a lot better off if he just golfed all day…in Kenya.