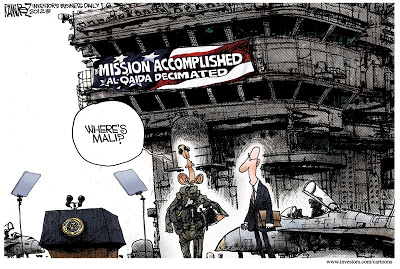 The Term
Asymmetrical warfare* has always been difficult for large nation states to deal with. Witness the problems that Imperial Rome had coming to terms with the Spartacus Rebellion. They simmer and erupt somewhere else just when you thought that the war was won.

*The term asymmetrical warfare is used to describe what is also called guerilla warfare, insurgency, terrorism counterinsurgency, counterterrorism and in the Obama Administration – a foreign contingency operation. It’s a violent conflict between a formal military and an informal, poorly equipped, but resilient opponent.

In Mexico, they’ve had a difficult time coming to terms with “winning the cartel wars”. For example: 18  months ago, President Calderon declared the La Familia Michoacan Cartel to have been completely eliminated. Today they are back stronger than ever, calling themselves Los Cabelleros Templarios (The Knights Templar). Same cartel fighters, different moniker.
At about the same time as Mexico announced that the war against a particularly nasty cartel was over, Assistant US Attorney Laura Duffy – a hard core Democrat intent on moving up, ran the Arellano Felix Organization Task Force. In order to move up from Assistant US Attorney to Obama appointee US Attorney for the Southern District of California, she had to move out of her task force job. The only way to do that was to disband the task force, declaring that the Arellano Felix Organization (AFO) had been vanquished. She got the big job and I personally think that she’s a good US Attorney, however, today, AFO is bigger than it has ever been, spanning the Mexico/US Border from the Pacific Ocean through New Mexico.
Radical Islam
The same problem exists with radical islam that exists in Mexico. Secretary of State and US Presidential hopeful Hillary Clinton is trying to cast the Benghazi albatross from around her neck as she stakes out her strategy to be president in 2016.
For all of the hopeful political hay that President Obama wanted to rake in on his giant success in Libya and for sending the Navy to kill Osama bin Laden — and for all of the political hay that Secretary Hillary Clinton wanted to make of her success with the so-called Arab Spring (2012), Al Qaida isn’t dead. And it won’t die until radical Islam is dealt with at its roots. After 9/11 we couldn’t very well have invaded our ally, Saudi Arabia. So we picked on Afghanistan.  The war in Afghanistan has done NOTHING what so ever to deal with the problem that is radical Islam.
In a larger sense, the quasi Islamic Obama would like to bring Islam closer to he breast. It doesn’t work because a hand will reach out and stab him with a knife if he does that.**

SOLIC
In the US Military, Special Operations – Low Intensity Conflict (SOLIC) has been a buzzword for decades now. The concept began in Viet Nam in the early 1960’s resting on the shoulders of the American experience with the Office of Strategic Services***

The War Department took over the Secret Intelligence Branch and the Counterespionage Branch. In January 1946, President Truman created the Central Intelligence Group (CIG) which was the direct precursor to the CIA.

I don’t think that it’s fair to characterize it as a “problem”, but the CIA (including the Special Activities Division) has been hamstrung from operating against radical Islam because of pressure from inside the Beltway. Thus the War on Terror was transformed into a more benign ‘foreign contingency operation’. Yes, the drone strikes continued, but the ground game was vastly reduced.
Asymmetrical Warfare Requires a Ground Game
Unfortunately for the United States, effectiveness in this environment requires people on the ground. The CIA (despite portrayals in popular media) is loath to do this because it constitutes risk. And the CIA in 2013 (unlike the OSS before it) is incredibly risk averse. The military is largely ineffective in dealing with radical islam except where small unit actions such as the direct action mission against the bin Laden compound are required.
The Future
Politicians will be declaring victory over – and over – and over – and over – in these low intensity conflict situations. Whether it’s the Mexicans, the Americans or the Indonesians in East Timor, it can’t be solved from office suites while minimizing risk. Neither can it be solved by lying to yourself and to your people about how well you’re doing. Politicians are in charge of these things and they seem incapable of doing much right. That’s why the US is headed for a $20 trillion dollar deficit by 2016. Nobody wants to face a problem head on.
Pat Condell weighs in on the issue of Islam, glorious martyrs, honor murders, etc.