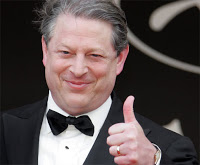 The month is not over, but I’m ready for it to be. This is your January 2013 Progressive Wrap-Up

Green Al Gore sold Current TV to Al Jazeera for an undisclosed amount. Based on what the people who are in the know are saying it’s on the order of somebody paying you 50 grand for your wife’s 2001 Ford Escort with 200k on the clock. The catch is the wife comes with the deal — and so it goes with Al.
Al grew up with a silver spoon in his mouth and hasn’t ever had definable scruples or principles. He fashioned himself as the face of global warming and as an enemy of earth-destroying fossil fuels. He won a Nobel Prize for his stance and when the price was right, he sold out to big oil. All of the progressive toadies who swallowed his lies were tossed like so much limp salad into the dumpster of life and one can expect that they’re looking for jobs at Media Matters or some equally progressive sewer.
2016 Presidential Hopeful, Hillary Clinton didn’t have any recollection at all about what happened at Benghazi either before the State Department people and CIA contractors  (former Navy SEALs) were killed or after. If you’ll recall Secretary Clinton claimed that despite the flood of information that she viewed to the contrary, she blamed an obscure video that nobody in the Middle East had seen. To Secretary Clinton, it was a mob responding to justifiably outrageous behavior by an unknown American citizen rather than a coordinated and combined arms terrorist attack on a US Consulate. Even though questioned sharply by the US Senate, Secretary Clinton (age 65) has been recovering from a recent concussion that can result in memory loss.

She wept openly at the microphone for the cameras and those Senatorial colleagues who were disposed to be gulled.  While Al Gore (above) may have won a Nobel Prize for doing essentially nothing but scam the green movement, Hillary Clinton may be nominated for an Emmy for her work in daytime television. 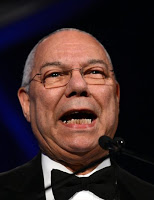 General Colin Powell backs Barack Obama because he is part negro; He wants every gun in America registered; At the same time, finds it “abominable” to require voters to have a photo ID to prove their identity. General Powell has become the darling of the progressive movement, trying to make himself valid politically once again — the lion in winter. And he still calls himself “a Republican”. Riddle me that one.

He is angling for a position as “special advisor to the president” but it’s not going to work because dear Colin is not from Chicago and he doesn’t have the Alinsky street creds for the position.

Newly Re-Anointed Barack Obama declared that there is no real liberty without big government. (A code-word for Orwell’s 1984: “Freedom Is Slavery.”)

Obama says he’s all for entrepreneurs, Grandma and her apple pie, but “a free market only thrives when there are rules to ensure competition and fair play.” He ignores the millions of victims of Fannie Mae and Freddie Mac, the monstrous public-private hybrids designed by government with rules to suffocate competition and fair play among banks in the name of redistributing income via residential real estate.

Our newly re-minted Chief Executive reaffirmed that executive branch has no intention over the next four years of reforming — or, more correctly, saving from bankruptcy — our wasteful entitlement programs. Indeed, ObamaCare is a huge new entitlement heaved on to the taxpayers’ backs. In his progressively correct inauguration address made it abundantly clear he is nowhere near to being finished pursuing collectivism in the name of individual freedom. Working hard not to allow a crisis to go to waste, the progressive left has worked diligently to eliminate the Bill of Rights to the extent possible with just one Newtown, Connecticut school shooting crisis, that could never have been averted by firearms control legislation.

The nation is sharply divided between the progressive socialists and the constitutionalists. At the moment, the Constitution hangs by a thread.