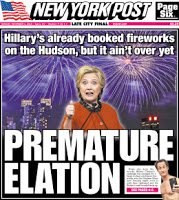 The New York Post broke the story of Clinton’s maid handling top secret material. I didn’t believe it at first, but that was just a gut reaction. When you think about it, what’s not to believe? It’s consistent behavior.

As secretary of state, Hillary Clinton routinely asked her maid to print out sensitive government e-mails and documents — including ones containing classified information — from her house in Washington, DC, e-mails and FBI memos show. But the housekeeper lacked the security clearance to handle such material. 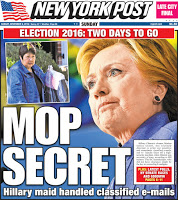 In fact, Marina Santos was called on so frequently to receive e-mails that she may hold the secrets to E-mailgate — if only the FBI and Congress would subpoena her and the equipment she used.

Clinton entrusted far more than the care of her DC residence, known as Whitehaven, to Santos. She expected the Filipino immigrant to handle state secrets, further opening the Democratic presidential nominee to criticism that she played fast and loose with national security.

She must be driven by pure hubris. What else would cause Hillary (former Senator) to play so fast and loose with classified material. And she calls Donald Trump dangerous – right Hillary.
I haven’t heard whether Hillary has reconciled with her (possibly former) lover, Huma Weiner, wife of disgraced Congressman Anthony Weiner, or not. It may depend on the outcome of the FBI investigation – and whether or not Hillary wins the election.
Speculation that husband Slick Willy would have a heart attack following Hillary’s inauguration and Huma Weiner would become Huma Weiner Clinton (the first partner), may need to be placed on hold. A loss in two days, may save Bill’s life. Of course, he’ll need to go into exile in Qatar, but he will do so very much alive. The question of Huma’s departure from the US to join her life partner and boss in her Middle Eastern homeland is still a hanging chad.
The editorial staff at Virtual Mirage called the Hillary Clinton Headquarters in Ventura, California to get a reaction from the workers there. “Sue”, delegated to handle the press, told our (rabid) inquisitor:
SUE: “Rumors like the one about the maid handling classified material are unfounded. Have you heard the maid tell her side of the story (on MSNBC)?”
VM: No, why is that?

SUE: “Because they are only rumors and beneath my dignity to comment on. We are confident that in two days Hillary Clinton will be elected as the first woman president of the United States, and that’s all I have to say on the matter.”
VM: Thanks, Sue. Are you willing to speculate about Clinton’s impeachment hearings should she win — for the record?
(click)