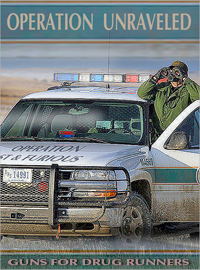 How much damage control at the Federal Bureau of Alcohol, Tobacco, Firearms and Explosives is enough to distance the now disgraced Operation Fast and Furious/Gunrunner program from President Obama and attorney general Holder personally? There were ‘reassignments’ and the acting director is connecting paperclips, pulling full pay in some bureaucratic oblivion. The NSC staffer who kept the President informed was transferred to the State Department and shipped to Iraq where he will remain on a ‘secret mission’ so long as Obama is in office so that he won’t have to testify before Congress.

Congressional investigators for Republicans Rep. Darrell Issa (R-CA) and Sen. Charles Grassley (R-Iowa) have asked to interview O’Reilly by September 30. But the Administration informed them that O’Reilly is on assignment for the State Department in Iraq and unavailable. (CBS News)

A White Paper has been circulating through the Department of Justice for some time suggesting that the ATF should be eliminated and its 450 agents, dismissed from government service. (how’s that hope and change working for the ATF agents?)
Despite White House assertions that neither President Obama nor Attorney General Holder knew about the operation allowing over 2,000 firearms to be sold to the Sinaloa Federation narcotics cartel, their arguments are wearing thin. For a more detailed understanding of the views of those INSIDE ATF on this situation, you may wish to visit CLEAN UP ATF.

“Managers, Counsel, Internal Affairs and staff of the Bureau of Alcohol, Tobacco, Firearms & Explosives (BATFE or “ATF”) have repeatedly given false testimony, concealed substantial waste, fraud and abuse, abused their lawful authority, and waged systematic campaigns of reprisal against their own employees that dare to speak out. This website is intended by members of the ATF community to promote restoration of integrity, accountability and responsibility to ATF’s leadership, and regain the trust of the American taxpayer.” (http://cleanupatf.org)

New Disclosures
(Link to CBS News) CBS Investigative Reporter Sharyl Attkisson learned that in addition to OPERATION FAST AND FURIOUS (Phoenix OCDETF Investigation including ATF, DEA, FBI, etc.), and OPERATION CAST AWAY (Miami OCDETF Investigation including ATF, DEA, FBI, etc.), a third operation was underway from the Tuscon Office called “OPERATION WIDE RECEIVER“. I honestly don’t know how many similar operations were being run through the Department of Justice, but nobody has looked in Texas, New Mexico or California yet… (hint)

One administration source says White House national security staffers were “briefed on the toplines of ongoing federal efforts, but nobody in White House knew about the investigative tactics being used in the operation, let alone any decision to let guns walk.” (CBS News)

To read the most recently disclosed e-mail between the White House and the Operation Fast and Furious team in action CLICK HERE.