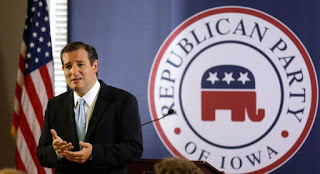 There are a lot of serious Ted Cruz supporters that read my blog. I don’t take issue with you but the calls from the Cruz Campaign to precinct captains AFTER they verified that Dr. Carson was not dropping out of the race is going to dog Sen. Cruz. It’s politics at its dirtiest. Worthy of a Clinton.
The thing that most surprises me is that Sen. Cruz didn’t fire the people involved immediately. He didn’t. He apologized to Dr. Carson but he’s still running in New Hampshire talking about his big win in Iowa. Nobody knows whether or not he won or not. It’s like the six-coin-toss thing with Hillary Clinton’s people.
(Breitbart) Nancy Bliesman, a precinct captain for Cruz in Crawford County, Iowa, told Breitbart News that she received two voice mails–one at 7:07 p.m. Central Standard Time (CST), and one at 7:29 p.m.–on the night of the Iowa caucuses, which began at 7:00 p.m.
The first call came from a woman with a phone number out of Galveston, Texas at 7:07 p.m. (transcript follows audio):[inaudible]…from the Ted Cruz campaign, calling to get to a precinct captain, and it has just been announced that Ben Carson is taking a leave of absence from the campaign trail, so it is very important that you tell any Ben Carson voters that for tonight, uh, that they not waste a vote on Ben Carson, and vote for Ted Cruz. He is taking a leave of absence from his campaign. All right? Thank you. Bye.

The second voicemail was left at 7:29 p.m. from an Iowa phone number that Breitbart News traced back to a Cruz campaign volunteer hotline.

“Hello, this is the Cruz campaign with breaking news: Dr. Ben Carson will be [garbled] suspending campaigning following tonight’s caucuses. Please inform any Carson caucus goers of this news and urge them to caucus for Ted instead. Thank you. Good night.﻿