Leadership! (a thing of the past?) 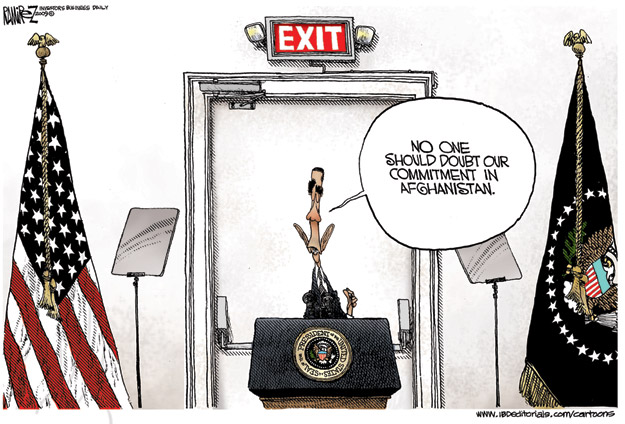 Some call him a charlatan. I don’t. He firmly established himself as an anti-free market collectivist who had no real world experience and absolutely no leadership experience. Still the people voted for the king of the teleprompter – and he does a fair job at reading other people’s words.

Barack Hussein Obama chose Afghanistan as “his war”. There were no more Al Qaeda training camps when he arrived in the White House – but there were a lot of irritated Pushtun and a relatively small American footprint. Today he managed to split his party and alienate any other nations which still like us enough to participate in the Afghan Adventure.


In an effort to please everyone, he announced a surge-and-wind-down strategy? (huh?) Does the Democratic caucus in the House of Representatives think this will help them get elected in a mid-term election where conservatives are sharpening their claws? The “we’re going to try to stop losing while we sneak out the door” plan is tantamount to surrender. We tell our enemies, in effect, “hold on through the surge because when it’s over, so are we.” In other words, ENCOURAGING THE ENEMY. I don’t know whether Barack Hussein Obama is bright enough to understand this – or maybe he thinks the American public is stupid enough to swallow more of his lies.

Obama spoke longingly of ending the “rancor and cynicism and partisanship that has in recent times poisoned our national discourse.” By that, the President meant, “can’t we all just see it my way?”