Will Donald Trump be the Next President? 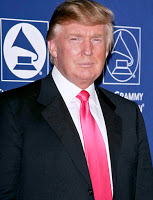 Trump is an outsider and there are a lot of Washington insiders who want the job. There are also a lot of Republican hopefuls who are politicians – like the mealy mouthed RINO, Mitt Romney, like the fringe player, Ron Paul and the mainstream politicians like Newt Gingrich who do NOT want to see Trump run. And that makes me want to see him run.
Drop on over to Atlas Shrugs and watch the interview Trump did with Meredith Vieira (NBC). In the interview, Trump said that Obama did one thing well — he ran for office. Other than that, he’s been a dismal failure. He has challenged Obama to prove that he’s a US Citizen (“I’ll show you mine, you show me yours.”) but doubts now that he was born in the US.

Trump has some things going for him:
1. Fiscal conservative who identifies with Tea Party values.
2. Has run companies, has made and lost money and knows the difference between the two.
3. His philosophy is AMERICA FIRST. And if there is a slogan for the Trump campaign, I think that will be the cornerstone.
4. He’s NOT a politician who speaks out of both sides of his mouth – and in a lot of ways, he’s sort of a male version of Palin without the vast hate and spin from the mainstream media.
5. He would clearly restore America without apologies.
6. He’s be good for business and business is good for employment.
7. He may not be super strong on foreign policy – or maybe on other policies, but with Trump, you can expect him to hire talent and lead.
How do YOU rate him against Palin, Huckabee, Romney, Gingrich and Pawlenty?
What do YOU think?