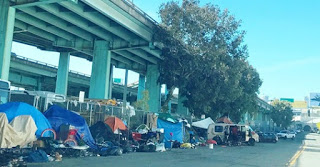 Facebook
Twitter
Pinterest
WhatsApp
Block off areas, herd the homeless people into the same busses used to transport prisoners, delouse them, evaluate them, house them, care for their basic needs.
The homeless would be better off if they were concentrated away from urban settings. You can call it a concentration camp if you’d like. Tents, latrines, etc. The Army knows how to build these. Surround them with high banks of concertina wire. They’d still be camping, they’d be fed army chow, which is a lot like prison food, but it nourishes. Make appropriate medical care available. But the point is that they’d be camping, which is their choice of lifestyle. The only difference would be no alcohol or drugs or hypodermic syringes.

Once established, those in the camps can be screened for mental illness. I don’t know how many by percentage are, but I can be persuaded that a number of them have mental problems that can be treated as best the nation can. Those of you who argue against this arrangement, need to also argue around the potential plagues and so forth that these hobo jungles can foster and then spread to the population.
They would be the ultimate safe spaces for at-risk US Citizens. Have the National Guard take responsible for guarding them and enforcing camp regulations. Who could argue that concentrating the homeless in such communities would be a bad thing? Triage short term care and long term care. Those with arrest warrants would be referred to the criminal justice system to answer for crimes.

Throw away their junk, issue clothing and basic needs. Give each of them a stipend when/if they are released (having been de-toxed) to start them on their way to a productive life. Offer vocational training.

Distribute Bibles if they’re in need of reading material. Definitely no televisions or other entertainment.
Now, how difficult is that?
Liberal families can sign up to take homeless people into THEIR homes (see “Down and Out in Beverly Hills“) as a form of halfway house. I think that all Democrats in the US Legislature should have half a dozen of these re-entering people live with them and their kids. It would help the homeless mainstream, right?