A Mess in Ukraine 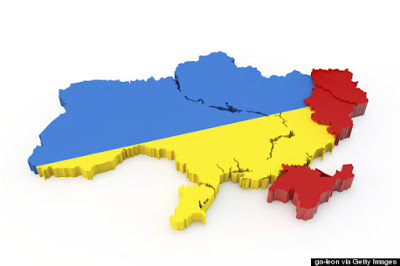 Ukrainian forces are engaged in clashes all along the line of separation that divides free Ukraine from Russian/rebel-occupied Ukraine. Despite reports that suggest that a cease-fire agreement is holding, it is only “holding” because the parties involved have a political stake in reporting that. Current military engagements appear designed to gain local tactical advantages rather than armored spearpoints designed to claim large swaths of land. No clashes were reported in the area of Mariupol that might have suggested an intention to expand Russian-held territory in the direction of Crimea.

The diplomatic and propaganda signals that Russian is sending to Ukraine do not include accepting the two southeastern regions in rebellion into the Russian federation. Russia prefers they remain autonomous regions within a federated Ukraine (the break-away region shown as “tan” in the first map, above,  Russia controls as puppets, after a fashion). It’s more complicated than the good-guy bad guy scenario that is usually played out in the press because as usual, there are ethnic differences in the break-away region of Ukraine (not including Crimea, which was annexed by Russia) that cause a lot of the difficulties.

Ukrainian President Poroshenko insists that the breakaway regions must remain part of Ukraine. That requirement creates tactical conditions for continued fighting with the Russian-backed rebels, but also for a strategic deal with Russia. Russian leaders have made clear that southeastern Ukraine is not like Crimea. The rebels that they are supporting with money, troops and weapons systems must make the best deal they can. This signals that Putin and the Russian Federation are not interested in expanding through all of Ukraine and that there is an end to their interest in engaging in a protracted civil war/blood feud between Southeastern Ukraine and the rest of the country.

What does all this mean?

The irony in the situation is that the outcome is close to what US policy meddlers wanted more than a year ago, but not in the way they wanted it. Ukraine is an economic basket case with a need for financing that no private bank or institution would risk. Foreign aid that intends to see money reach “the street” is very difficult to manage because things in the nation are so chaotic.
Ukrainian ties to Moscow that existed before the Russian sponsored “rebellion” have been severed. Ukraine has no recourse but to align with the West. Whatever else Russian President Putin judges that Russian meddling has achieved, it has not prevented Ukraine from focusing on the West. The Russian policies supporting southeastern Ukraine have produced a windfall for the West. NATO and European policymakers could not have engineered this outcome on their own, except for Russian bungling. Ukraine looks West.

Ukraine is relying on NATO assistance for military training and reforms. Russian support for the southeastern Ukrainian rebels has accentuated Ukraine’s orientation towards Europe. As a former socialist republic, however, Ukraine has too much official corruption, too many entitlement programs and too much bureaucratic mismanagement for easy membership in the European Union, not to mention NATO.
They have to mend their own house and that is not easy in an environment where central government (now destitute) has been the guarantor of nearly everything in the way of means. Building the Ukrainian infrastructure such that it will be self-sufficient will take years of change and a different mindset on the part of the people, who were ruined under the failed Soviet system.
Frankly, I can’t understand how Americans, such as President Obama and his coterie, find anything about communism to be appealing except for the notion of increasing their personal power. It failed in Russia and Ukraine and ultimately bankrupted both the nation and the spirit of its people.