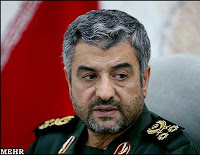 Facebook
Twitter
Pinterest
WhatsApp
Iran is a nation that currently faces increasing internal unrest. Unemployment is endemic at roughly 40% and the bazaar strike continues (though this week marks the beginning of religious holidays that close the bazaars). The infrastructure in Teheran is weakening as evidenced by widespread failures of the power grid in the summer heat. Forest wildfires are raging on the outskirts of the city.

The domestic situation in Iran grows more perilous as the summer of discontent continues. Ahmadinejad (and the Revolutionary Guard) finds it difficult to discipline everyone who is jumping ship on the regime. As a result there have been ongoing purges in the ranks of the Revolutionary Guards. Major General Mohammad Ali Jafari, (photo right) commander of the Revolutionary Guards went on the record with Iran News (reported by German Radio) admitting that a number of their agents’ support for the leaders of the opposition movement. He said that it is better to convince them back than to have to have a physical confrontation, whereby they would have to be eliminated. Since when did the Islamic Republic blanch at eliminating dissenters?

“Fars News, the media arm of the Revolutionary Guard also wrote: Mohammad-Ali Jafari who was speaking at the launch of the first series of the Defense Readiness Program Trainers, on Saturday, July 22nd, responded to questions regarding the reasons why the dissident guards who support ‘the leaders of sedition,’ have not be dealt with. He replied: “They have been convinced that their actions were wrong and that their acceptance would be preferable to any physical confrontation and ultimate elimination.”

It is worth mentioning that this is the first time where any Iranian regime official has admitted to such discord within the ranks. What Jafari did not admit to however was the number of agents and the issues that have lead to dissent.”

Hojattoleslam Mohammad Nasser Saghay Biria, President Ahmadinejad’s Advisor on Religious Affairs, has resigned his post in what his close associates are describing as a protest against Ahmadinejad’s alleged un-Islamic views on requirements for women to wear veil and conform to strict Islamic dress code. Ahmadinejad has not yet accepted Saghay’s resignation. (Saghay Biria is a disciple of Ayatollah Mesbah Yazdi, said by many to be the next in in line to become Supreme Leader).
To be fair, this sort of internal dissent has been rampant in Iran — forever. However, the ability of the present regime to muzzle it is new and some say that as the opposition increases, the possibility of provocative military action (against Israel?) increases. Nothing galvanizes a nation like external threats and war.