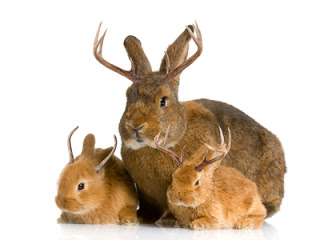 Facebook
Twitter
Pinterest
WhatsApp
Jackalopes, once abundant in the American West, are being hunted to extinction. Who among you will donate to stop this senseless slaughter? Send your donations to Save the Jackalope Fund: Pay Pal – larry.lambert@mac.com. The money will be put to good use.
I’ve been told that every environmentalist needs to have a cause and I have chosen this one. Habitat preservation is a key element of the Save the Jackalope Fund. I hope to buy land and set it apart as a Jackalope refuge area. In order to better serve the Jackalopes, I need to construct a cabin on the land, drill a well, and build a shed to store my Jackalope research vehicles.

Hunters in the Rocky Mountain West prize Jackalopes for their fine racks and for their lush pelts (right). There are different varieties of Jackalope. Not all of you may be aware of those subsets of the genus – Jackalopicus Hornicus. Some are more endangered than others and what has the Federal Government done about it? In a word, nothing. I’m trying to pick up the slack and with your help, it can happen.

Once the refuge is in place (if you build it, they will come), I will  provide safe haven for all of these critically endangered members of God’s Kingdom.
If you are traveling through Dubois, Wyoming and stop at the Exxon County Store, you can sit astride a genuine, stuffed prehistoric, giant, cave Jackalope, ancestor of the modern Jackalope.

In ancient times, they flourished as far south as Texas, but the Comanche hunted them relentlessly because of their prized racks and pelts. Can you drink the milk of a Jackalope? Rumor has it that the Comanche did and that alone led to their fierce warrior culture.