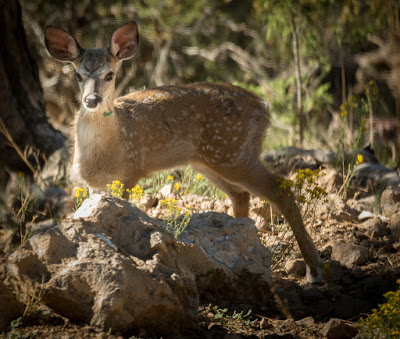 Facebook
Twitter
Pinterest
WhatsApp
Usually white tail deer fawns are born in late spring, but occasionally, they’re born in the late summer. We have a new (and yet late) arrival, spots and all and his mother who are regular visitors.

The fawn has two older brothers who sprout forked antlers this summer and they still hang out from time to time, but it is the baby that’s getting all the attention.
And where the baby goes, Mother white tail is close by.
We don’t see that many white tail dear in this area. They are mostly mule deer. And there are the fat, sleek elk, which have been grazing all summer as the deer browse. 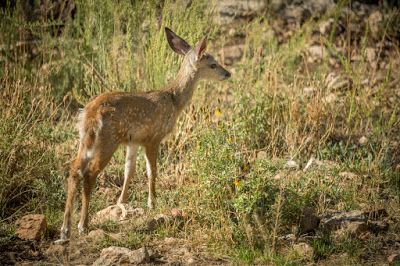 Usually the mountain lions avoid adult deer, even white tail deer, which are quite small. They’d prefer to eat a javelina (peccary) or easier game to kill, but a fawn…now, that’s a much easier and tastier meal.
Many white tail deer births are multiples (often two) and as far as I can tell, we only have the one fawn.
The javelina (below) reproduce quickly and serve an important part in the food chain. They are only occasional visitors to the White Wolf Mine. There are areas up here where people feed them that they are more likely to be seen by humans.  Even though they’re rodents, not pigs, they exhibit many of the same characteristics that pigs do. They grunt, root around, and are destructive. But they don’t grow to be large, the way that feral hogs (or feral Hoggs) tend to. 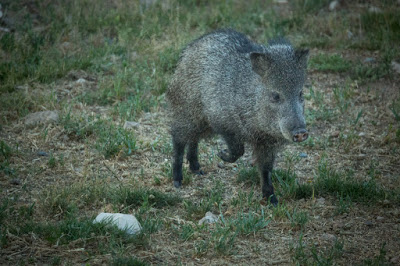 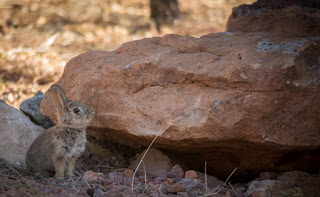 We also have a late rabbit (I think that it is a hare) that makes the occasional appearance. It’s not unusual to see a rabbit, but the predators that we have here keep the population thinned out. There are coyotes, but the lions eat them. Generally mountain lions and bobcats feed on the rabbits. Somebody asked me if we have wild dogs up here (other than coyotes and wolves). I don’t think that a domestic dog would last long. There are simply too many apex predators.
While I do keep track of the political circus, and international events, there are far more interesting things going on around me, if I but take the time to look.

A Footnote to the Day