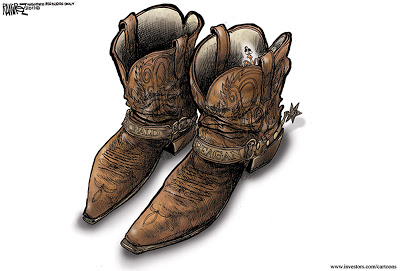 Facebook
Twitter
Pinterest
WhatsApp
Happy President’s Day — now lets look at where the present leadership has and is taking the United States:
The second anniversary of the stimulus package, passed on Feb. 17, 2009, saw an additional $3.4 trillion having been added to the national debt, according to the Bureau of the Public Debt. During that year, the government has had to borrow an additional $29,600 per household, raising the total debt burden to $125,475 per household.

When Ronald Reagan took office, we were in the grip of financial woes and had four failed years of President Jimmy Carter (by all accounts the worst president in recent years–until Obama took office). He inherited a nation that was suffering from crippling inflation (prime rate 21.5%) and from a president whose only foreign policy was appeasement. Does that sound familiar?
Today, we have very weak and unreliable leadership in the White House, the nation is in serious financial trouble and the economic malaise isn’t going away. The Obama solution has been to increase the burden of government regulation, nationalize General Motors and swallow the healthcare industry. The unemployment numbers only inch up and the dramatic increase in government subsidies and programs stagnate rather than helping. Oil prices are rising and may reach the projected $5.00 mark at the pumps by the end of the year.
Leadership matters and the direction that leadership takes the country matters.  We can turn the ship around but we can’t do it with the current fool in charge — and like a dog with fleas — with his coterie of misfits filling appointed positions.