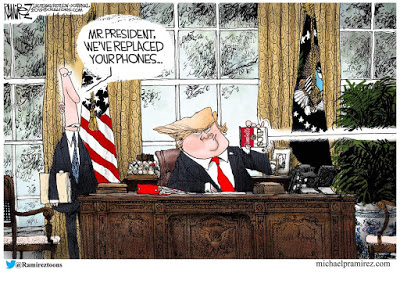 Facebook
Twitter
Pinterest
WhatsApp
Counting Votes
Speaker Pelosi (D-CA) can count votes. If she has a simple majority, she can call for a vote for articles of impeachment. Facts are not necessary, proof is not necessary, it’s simply a partisan vote.

The matter is then referred to the US Senate for Trial. It will be presided over by the Chief Justice of the Supreme Court.
During the Trial
The President will have the right to subpoena witnesses including Barack Obama, Joe Biden, Hillary Clinton, John Brennan, James Clapper, Big Jim Comey, etc. They will testify under oath under penalty of perjury and they’ll turn on each other in a public setting.
The Vote
The Republicans and a few Democrats will vote not to impeach the president (a 2/3 majority must vote to uphold the impeachment if he’s to be removed from office).
The Aftermath
The Democrat Party will be shredded and the corrupt, lying mainstream media will complain that the Trump impeachment was rigged.
AND THAT is why Nancy Pelosi has not put an impeachment vote on the floor of Congress.
Now, the Mail:
A Late Arrival

OldAFSarge – Nature can be pleasant to contemplate. When it’s not trying to kill you that is!

That’s why it’s useful to go afield with the means to defend yourself. I apply the same standard in cities that I visit in the event that a cretin decides that I’d make a splendid victim.

LSP –  Great pics and a pleasant change from the impeachment circus.

As you can see (above) we’re back to the circus. The donkeys don’t want an impeachment trial, because it would be a trial of Barack Obama, Slow Joe Biden and Hillary Clinton ultimately. They know it and President Trump knows it.

Jules – How very beautiful! You did the right thing moving there. I’d be up and in that all day long. Nature cures a lot.

I went to Wollaton park ( home of Batman in the movies) and the T. Tex and I got cornered by a gigantic stag in rutting season. That was a touch and go scenario let me tell you!

The silence and the wind through the pines is addicting. It’s good that you had Terrible Tex the wolf-dog to hold the gigantic stag at bay. In a year or so, he’ll bring the stag down for you and you can eat stag steaks and stag jerky.

Jim – You seem to have a wider variety of wildlife than we do. No elk or javelina, but whitetails and turkeys abound, plus coyotes aplenty and bobcats and rumors of mountain lions for predators. The apex predator of the whitetail seems to be the motor vehicle.

I live an hour’s drive from the nearest town. That makes a difference.

DaveS – Saw a pair of young fawns (late season babies) just a few weeks ago – and now we’re bracing for 18″-36″ of snow this weekend. Mother Nature can be harsh.

I don’t know what the winter kill rate is on late season fawns. Where I am, we don’t usually get that much snow. Last year set a record for both cold temperatures and snow depth… and the young deer did just fine, but they weren’t fawns.

Raven – Nice living in the woods, isn’t it!

It’s good for the soul.

Woodsterman – Enjoy it while you can. We all only have 12 more years to live, you know.

I think that they said that two years ago, and the clock is remorseless. We’re down to ten years remaining after which all life on Earth will die. However, a ten year threat isn’t all that ominous to me because I might not live that long. Predicting that I have ten years to live makes me say, “cool”. I’m frankly shocked that I have lived as long as I have, being a wicked old SOB and all that.

It’s all part of the service.