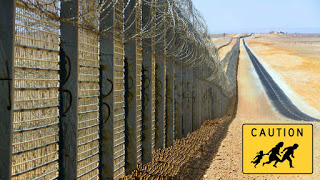 At the G-20 Summit, Mexican President Enrique Pena Nieto sat near President Trump as President Trump announced to the world that the wall would (still) be built and Mexico would (still) pay for it. The smug, elite, nasty, lying mainstream media that only discusses why the American President should be either assassinated or impeached, countered with facts that cross-border illegal immigration if off by 70% under the Trump Administration. They contend that a wall along the Mexican Border is no longer necessary, if indeed it ever was.

Yes, the liberal tears flow freely at the thought of all of those illegal aliens who won’t be able to vote Democrat for them (illegally).

But there’s another point that you should consider. The bulk of illegal narcotics (which liberals feel should be legal) that cross the US/Mexican border have suffered no significant price increases* due to increased border enforcement.  In a world of supply and demand, we should see that, but we haven’t. Thus, the wall still needs to be built for oh, so many reasons that the left calls “racist”.  Yes, there will always be drugs and addicts, but opiate addiction (from pills and heroin) has reached the crisis stage in many American cities. Will the WALL change the dynamics when it comes to narcotics smuggling? Most experts say that it will. But impacting the massive demand in the US is the only way to fix the problem.

* There are no hard and fast rules for cocaine, heroin or methamphetemine prices. As with anything that is bought and sold, these prices can fluctuate and vary depending on various variables such as supply, demand, times, conditions, significant seizures and arrests that disrupt networks, etc; Typically, the price will increase the further it is from the original source. This price increase is largely due to the costs involved in transportation costs. Thus, this is why a kilogram of cocaine in Colombia can be purchased for around $1,800 (the price for kilo of cocaine paste from the cultivation farm is about $900) but in New York City can be purchased for around $30,000. Prices will typically be cheaper that are near cities that have major distribution network centers.

Having said all that, the wall is a good idea, and Mexico will pay for it by hook or by crook.

The famous painting of Bonaparte astride a horse, seeing the Sphinx for the first time represents the literal, i.e. a head rising up from the desert, and the metaphor. There is usually more to be seen that we apprehend at first glance.
Hunters understand that there are clues left by prey. If you plan to cut for sign (successfully), you must understand what those clues are.
The Founding Fathers understood that the Second Amendment was not about hunting and it was not about protecting people in their homes (per se). It was about the right of the people to defend themselves from tyranny in the larger sense. Slaves NEVER have the right to own and carry firearms.  In a real sense, the historic repudiation of the repugnant Hillary Clinton and Jeb!, the creature of big government — and the election of President Trump, was all about the future of the Supreme Court, shrinking the size of government and empowering people. No matter how the corrupt, smug, elite mainstream media spins it WE THE PEOPLE won for the first time in a long time. The message has been garbled by apologists, and the message that is obscured needs to be named. We are free because we are armed and capable of defending ourselves from the government.