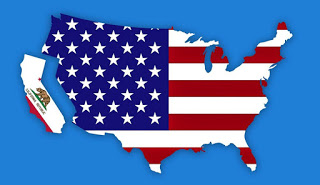 I’ve had an education on the CALEXIT (pay attention Old NFO). As I mentioned, I sold the CA house to people who wanted to live near the newly constructed giant mosque-down-the-street. The plan was to move to AZ, rent in the Phoenix Valley while Emilie went to college in AZ and then move to the White Wolf Mine in the mountains when it was finished.

Without belaboring the issue, I learned that there were five ‘fugitives’ from California trying to rent every house that came on the market in AZ. It’s insane. Apparently the sales market is equally nuts. Rentals are on the market for one day and people bid up the price. I offered to pay $3.3K+ per month on a house not worth that and to pay the whole year up front. Even that wasn’t sufficient. So I’ll rent in SoCal near the kids until the house is done and Emilie can stay in CA near her friends.

California has become a species of toxic environment for conservatives as the lunatic fringe, backed by the corrupt, elite, nasty, filthy, lying mainstream media cheers them on. As a result, people are leaving pre-California secession in droves.  I just never thought that it was as pervasive as it is in AZ. It’s 115 degrees in the Phoenix valley and people are stacked up to be here just to get out of CA.

The White Wolf Mine project, though nowhere near ready, makes more and more sense.

The standoff between Indian and Chinese border troops in the China-India-Bhutan tri-border area continues. The Chinese claim that Indian soldiers continue to trespass on Chinese territory.
Bhutan said the Chinese are building a road on a plateau that belongs to Bhutan and requested Indian help. The Indians said they are acting as the protector of the Kingdom of Bhutan.
India and China have reinforced their positions and tension is high, but no clashes have occurred. Border troops on both sides generally do not carry guns to prevent escalation to exchanges of gunfire.
The G20 summit in Hamburg would seem to be a convenient venue for a meeting between Chinese President Xi Jinping and Indian Prime Minister Modi to resolve the standoff. However, the Chinese rejected an Indian proposal for such a meeting because “the atmosphere was not right”.
At the daily press session on 6 July, the Foreign Ministry spokesman said there will be no talks until India withdraws its forces from the “Chinese” plateau. To China – the world belongs to China. It’s how they roll.

The standoff began on 16 June when Chinese border troops and construction teams began road construction on the Doklam plateau. That action prompted Bhutan to protest to China and to ask for Indian assistance.

The area of the standoff is strategically important and highly sensitive. It lies just north of a territorial choke point known as the chicken’s neck. Loss of Indian control of this area would cut overland access to all of northeastern India.

Indian strategists consider an increased national security threat any improvement to China’s capability to rapidly reinforce the tri-border area, such as by building a road.

India’s China experts also see this dispute as part of a pattern of Chinese behavior. They accuse Chinese forces of quietly slicing off and converting small pieces of disputed territory along the border to provide tactical advantages for Chinese forces at the start of a war. They judge this to be the land version of Chinese military behavior in the South China Sea.

The Chinese will not back down because their leaders have determined the area to be Chinese sovereign territory. The Indians said they are looking for a solution, not a compromise. They also have indicated no willingness to back down.
Kurdistan

On 6 July, Kurdish leader Masoud Barzani, President of Iraq’s Kurdistan Regional Government (KRG), said that there is no turning back on a bid to achieve an independent Kurdish state.
Barzani said in an interview he expected the referendum on independence, tentatively set for 25 September, to result in a strong vote for independence. He hoped to negotiate a peaceful separation with the authorities in Baghdad and neighboring countries.
In June, Barzani assured a universally disbelieving international community that the referendum was part of a political strategy to strengthen the KRG’s leverage in negotiations with Baghdad over land and oil rights and political issues. His explanation was not convincing.

If it comes down to a fight, the US will back the Kurds.