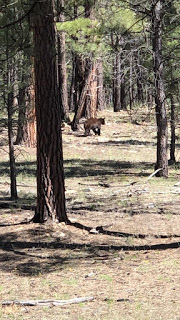 
Harry Truman is quoted as saying, “My choices in life were either to be a piano player in a whorehouse or a politician. And, to tell you the truth, there’s hardly any difference.”
The First Bear of the Season

There are bears in the high country and this is my first bear sighting of the season (right), taken with my cell phone camera. The bear was ambling away from me and put a bit of distance between us as I grasped for the cell phone and selected the photo icon. I haven’t seen any wolves this spring, but it’s said that they’re running north of me.
That passes for news at the White Wolf Mine.
Campers in the Coconino National Forrest seem to attract the bears with cooking and with trash. There are no campers within a mile of me, but they showed up for the Memorial Day weekend, snow and all.

Virtual Mirage turned ten years old a month ago. After that long, I’m loathe to change horses, but may make the jump from Blogger (Google) to WordPress. Blogger has been a real pain in the neck as of late and I suspect that it has to do with Google’s socialist bent and my feelings in the other direction. I consistently get about 50,000 hits per month (thank you all for hanging in there). So if you see a change in the coming weeks, it should be cosmetic only, as the content will shift to WordPress along with the blog. Virtual Mirage will remain free of advertising and lame attempts by me to drag the sack and beg you to part with your hard earned money.
On Writing
I usually don’t read books which find their topics on vaginas or on sodomy. It’s not that I’m anti-vagina. I just have interest in reading other material. Our fellow blogger, John D. pointed out an incident recently when Naomi Wolf, author of “Vagina” and “Outrages: Sex, Censorship, and the Criminalization of Love” found that the thesis of her upcoming book was based on her misunderstanding of the law and court records in the past. (More Here) Research is key when you’re writing of cultural things in the past. Apparently nobody was executed in merry old England for sodomy, though her book was based on those executions.