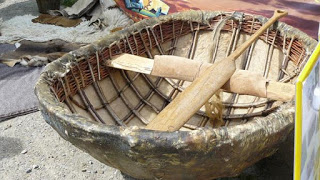 “… and as he stared at the sky and listened to a cow
mooing almost dreamily in a distant village, he tried to
understand what it all meant — the sky, and the fields,
and the humming telegraph pole; he felt that he was just
at the point of understanding it when his head started to
spin and the lucid languor of the moment became
intolerable…”  —Vladimir Nabokov

The People live by the sea shore in a village of some seventeen families. Soon there will be two more families as young people mature and pair off to separate from their parents and build homes of their own.  The daily routine almost always consists of salting and smoking fish on drying racks. Everyone works, doing something for the collective good. Families tend to specialize in certain chores, whether it is tanning leather or making sandals. The priest attempts to interpret the will of the Shimmering God. Some of his findings make it to pigments applied to the walls of the cave where he tosses his runes. The war chief is also the chief scout and he casts about to insure that the village is safe from raids.  If it all feels oddly familiar to you, then perhaps it
is the memory of a picture in a forgotten story book, or
an ancient landscape on a gallery wall.  Maybe you will be reminded of the scribblings of savages on a cave wall? Perhaps crackpots on obscure cable networks will extrapolate from those drawings to form wild conclusions? Who is to say?

The lives of the ancient men and women in this fishing village are not all that different from your own with the exception of technology’s application, built like a wall, brick upon brick over the millennia so that you can exult in your superiority — while they are but mute examples of what you would be if the wall fell.

Their only two boats foundered at sea, not far from shore. The men swam to safety, but crashing waves smashed the woven reeds and stretched leather hulls of the coracles. Others would have to be made. The fishermen also lost their nets. More time had to be put into weaving them and the women of the village worked together, united in the cave that served as a community gathering point. A sweet water spring flowed from deep within and through mouth. They used the cave to store smoked, dried fish and dried sea weed. It also provided a rally point in the event that outsiders attacked the village. The entrance was tight enough to be defensible yet broad enough to allow people of the village to walk in and out carrying bundles.

The People continually worried about raiders and there had been a number of attacks over the years. Assaults on the village resulted in damaged homes, constructed of tanned leather, coated with fish oil, draped over wooden frameworks, but damage to where they lived did not mean that they would lose their food or their fire. The central fire, which burned in the cave continually, vented through fissures in the roof to the outside. They took turns stocking firewood and feeding the flames.

The presence of dogs in the camps, not much more than domesticated wolves, provided  a first line of defense against marauders. Raiders seldom brought dogs with them. However when Tor, who you will meet later, raided, he usually brought a bitch in heat that ran off, with the entire train of male dogs from the victim village chasing her. The most important component of any raid was the capacity to retreat and not to lose their own men.

Raids took place in the summer. Spring and Autumn days were spent thinning the herds of large migrating animals, tanning hides and jerking meat that supplemented the bounty of fish from the sea. They exempted the bee keeper and his family from doing anything that would distract them from collecting honey, keeping the bees happy, and brewing mead. The most precious article that the village owned was a bronze pot, bequeathed to them by the Shimmering God. Legend said that the recipe and methodology for making mead also came from the God, himself. They handed the secret from father to son.


All of the villages along the coast were related by blood. New settlements formed from time to time when pressures required village members to leave and set up separate lives. Even though there were some hard feelings, they all realized that no matter what, they were kin. Therefore raiding rarely resulted in significant injury. A fertile woman or healthy child were the most valuable prizes that could be taken in a raid. Barbarity, rape or abuse were unknown. The captives of this age are much the same as gold will be to plunderers of later ages. The captives usually accepted their lot as best they could.

Rog, the village priest, crept into Tor’s hut in the early evening, scratching on the post closest to the opening, a polite form of entreaty.

Tor lifted a stout club, wrapped in leather, topped with a copper head, flat on one side and pounded to an edge on the other. He seldom used it as a tool, preferring to keep it as a symbol of his role as war band leader. The few occasions when he wielded it as a cruel and fearful weapon struck awe in the hearts of their rivals in other villages.

Rog and Tor were twins, not identical. Tor stood tall, with wide shoulders, blonde hear and a great red beard. Rog, think as a reed, and darker of hair and complexion, lacked his brothers aggressive tendencies. His was a more thoughtful and circumspect personality. Their father had been both the village priest and war chief. He handed Tor the hammer and Rog, the medicine bag, when the time came to pass the mantle. Their father banished their siblings, as was the custom. Their brothers and sisters either joined with another village or started their own.

“Tor, the omens are good that the shining God will appear again. The runes don’t lie.”

“Go back to sleep, Rog, that’s a story repeated by old women. They talk of their grandparents meeting the Shimmering God and I’m sure that the grandparents spoke of their own grandparents meeting with the Shimming God, receiving gifts, the story getting bolder with each telling. Maybe the Gods gave us that bronze  mead pot and maybe they didn’t.” Tor scratched himself,  “Is that why you woke me?”

“No, Geret brought word of a raiding party on the beach past the bluffs. They could be here as early as tomorrow. They have long hide boats, not coracles.”

“Geret, is a fine fisherman but his judgment in such matters is suspect. Is he certain they are not traders?”

Rog thought for a moment. “Augeries suggest the shining God will return. That is my role. Geret’s opinion is Geret’s opinion. I thought that you should know.” Rog backed out and Tor set his hammer down.

Sometimes even Tor found it difficult to distinguish between raiding and trading parties. Trading fish for flint and other useful items brought wealth and comfort. Fur and oil from the Ice Lands provided relief from the cold during winter and made their homes waterproof. Braided horse hair ropes from the steppes were useful as well. In all cases, traders took the opportunity to examine what The People had and measured the number of men that they could put in the field to defend the homestead. Traders needed to travel with warriors among their numbers to protect their goods.

He woke fully, cursing Rog, taking his war hammer and a stout spear with a flint tip.  Breta, his wife, pulled him to return to bed. While it would have been his preference, he turned to. He had a duty to The People and the village.

On the beach the Raiders have set
up a comfortable camp with a cooking fire on the beach, protected from view by large rocks and a copse of trees. Tor has come down from the bleak hills. The smell of fire and food drew him him in the darkness. He observes the camp, captives bound and warriors preforming rituals familiar to him. The raiding boats are as long as four tall men, made of hides strapped to wooden exoskeletons. One boat will come as traders to draw The People out. Three boats will follow as raiders, possibly landing around the point of land and coming at them on foot, and they would outnumber his warriors two-to-one.

By dawn, the time draws near when he will need to move away from the Raider camp and back to his own village. The first boat, carrying lightly armed men sets off. The next boats, loaded with warriors, captives and loot wait. A priest shouts and dances, blessing their venture.

Continued with part two of three, “The Shimmering God“.