Tax Ruling (with an update) 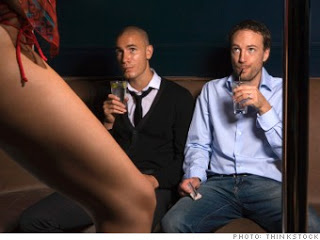 Facebook
Twitter
Pinterest
WhatsApp
Sometimes you find that tax investigators go the extra mile for the sake of the public that they serve. Nowhere is that more evident than in Albany, New York. (h/t SE for pointing me in the right direction). Some people think that Bruce Jenner needs an award for transforming from a man into a tranny. I think that the outstanding service award should be given to the tax investigation team who gave their all.

(NY Post) It can be awfully hard to stay abreast of the tax laws.

A judge has ruled that an Albany strip club can’t be taxed on pole dancing because that’s an art — but must pony up for proceeds from lap dances since they lack “artistic merit.”

The Nite Moves club won’t have to pay sales tax on about $1 million it collected in cover charges between 2005 and 2010 because that income is exempt, since customers paid for “a dramatic or musical arts performance,” the judge ruled.

But private lap dances — which cost $20 for topless and $30 for nude, per song, at the club — aren’t artistic enough to be qualify.

Administrative law judge Joseph Pinto Jr. seemed especially impressed with the testimony of strippers “Alize” and “Taylor,” who talked about the work they put into their performances.

“Alize was also featured in video performances at Nite Moves that were entered into evidence,” the decision read.

“Taylor had a more significant background in jazz and tap dance and athletics,” the judge wrote, noting that she stripped to songs from “The Rocky Horror Picture Show.”

The ruling revealed that an undercover tax investigator paid at least 15 visits to the club in the line of duty and received one or two lap dances each time.

Nite Moves is Albany’s only totally nude strip club. For schedule information on which artist is appearing when, check this link. (In case any of this blog’s readers may wish to check the work done by the state investigators)
Since the judge ruled that private nude dances aren’t artistic enough to qualify for tax exempt status, I can only suggest that Judge Joseph Pinto jr. may need to go to Nite Moves and experience the art for himself in the same way that the dauntless investigators did.

And in related news, the cost of a four year public college education is $24,000 per year.

KVVU-TV reports that Little Darlings manager Rick Marzullo says the ads fit in with the character of Las Vegas.The signs have slogans like “Now auditioning the class of 2015″ and “Pay your way through college.”

Marzullo says he is offering a way for young women 18 and older to make good money in a struggling economy. He says entertainers at his club make up to $1,000 a night and he has noticed more and more women turning to stripping to help with rising college costs.

The KVVU TV news report didn’t say whether the young artists would be taxed for their artistic renderings, but since Nevada is nearly a tax-free state, I’m guessing that they won’t. This may require investigation…

>>UPDATE<< – another unrelated, yet related story.