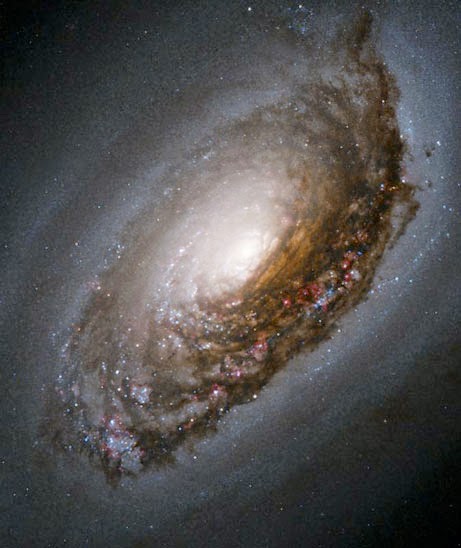 Facebook
Twitter
Pinterest
WhatsApp
Galaxies are made of three main ingredients: stars undergoing various degrees of stellar evolution, clouds of gas and dark matter.
Even as scientists are convinced that they are right about everything, nobody knows what dark matter is.

Astronomers using observations from the NASA/ESA Hubble Space Telescope and NASA’s Chandra X-ray Observatory have studied how dark matter in clusters of galaxies behaves when the clusters collide. The results, published in the journal Science on 27 March 2015, show that dark matter interacts with itself even less than previously thought, and narrows down the options for what this mysterious substance might be.*

Dark matter is a giant question mark looming over our knowledge of the Universe. There is more dark matter in the Universe than visible matter, but it does not reflect, absorb or emit light, making it invisible. Because of this, it is only known to exist via its gravitational effects on the visible Universe

Some scientists opine that dark matter might be constituted of “supersymmetric” particles. Supersymmetry is a theory in which all particles in our Standard Model — electrons, protons, neutrons, and so on — have a more massive “supersymmetric” partner. While there has been no experimental confirmation for supersymmetry as yet, the theory would solve a few of the gaps in our current thinking. One of supersymmetry’s proposed particles would be stable, electrically neutral, and only interact weakly with the common particles of the Standard Model — all the properties required to explain dark matter. But that’s a theory and while scientists make a respectable living assembling this sort of theoretical model — nobody knows what makes up the greater part of the Universe.

So much for mankind having the answers.

Is there a God? Progressives (in particular) make the case for no God and ridicule prayer. However those same people have no problem believing in invisible rays that travel from point A to point B and bring a message to their i-phone. I realize that is not considered a fair comparison. Mankind’s knowledge is based on a very small subset of information, but we think that it’s huge. We have no idea what makes up well over a third of the known universe and is the glue that holds everything together.
Today is Easter and people around the globe will celebrate the resurrection of Jesus Christ. I wish them and you a Happy Easter.

I hope that you are able to spend time with those you love here and now with the understanding that what we do in this life, echoes in eternity.