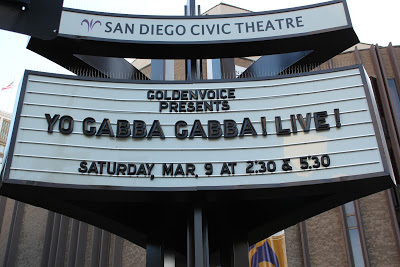 Facebook
Twitter
Pinterest
WhatsApp
Most children’s programming is conceived by network executives and promoted through established channels. That’s not true for YO GABBA GABBA. It was developed by two fathers in Southern California who were disappointed in children’s programming. They had no experience with writing or with broadcasting or education. They conceived of a show that would include/feature real artists and performers. That’s how Christian Jacobs and Scott Schultz brought the television show (seen on cable TV – Nick Jr. in the US and throughout the English-Speaking northern hemisphere.

They also tour and they do concerts. My 11/2 year old grandson is a fan and my daughter bought tickets to see the show in San Diego last Saturday. While you (whoever ‘you’ are) did something useful, I watched a Yo Gabba Gabba Concert performing to a sold-out crowd. She bought us t-shirts with Yo Gabba Gabba themes on them. Some people came in actual character costumes (think Yo Gabba Trekkies).
The kid’s series features themes such as “Don’t bite your friends” and “There’s a party in my tummy”, that promotes healthy eating habits.
The concert kicked off ten minutes past the scheduled starting time and that was a bit vexing because you have to imagine a really large theater seated to capacity with ‘babies’ ages about 1 to 4, howling and wiggling. However, once it started, it was worth the aggravation of the late start. 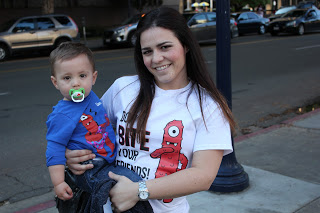 Good children’s programming is very important because it does impact them from a formative sense. Yo Gabba Gabba doesn’t have much of an appeal to adults, but the kids love it.