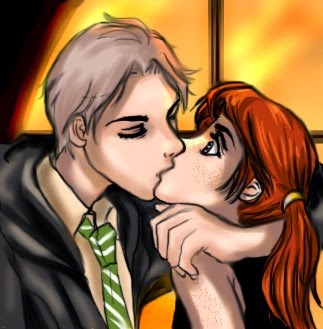 The strange and aloof girl had been
looking over my shoulder while I filled out an application. I self-identified
as being a member of a favored race, knowing that I was gaming the system and
she called me on it.

“Bog Irish, indeed. I was born on the High Street in Dublin.” I looked over my shoulder at her. She had brown hair, freckles and vivid blue-green eyes that sparkled with her mischief.

“Boston, Louisburg Square.” She spoke the words with an educated lilt that one could expect from the Louisburg neighborhood. “And my name is Dane, Sheryl Dane.”

“Are you slumming here, Dane-Sheryl-Dane of Louisburg?”

“Are you, Dublin?”
“Not Dublin since I was a boy. Pure red-white-and-blue, on my part and it’s self-identification, don’t you
know? These days race is what you feel that you are and at the moment I feel a bit oppressed
and need every advantage since I’m not from Louisburg. If there was a section where I could identify with
being a male lesbian, I’d do that too. Notice how sexist the Massachusetts form is. They only allow for male and female options. In California, you’d have at lest fifteen different gender identification choices which would be offered, each with its own peculiar advantage and associated pressure group to defend it against the God-quoting conservatives massed out in fly-over country.”

I can’t tell you why, but instinct took over. It may be the same instinct that made humanity prosper because if you’re reading this, all of your ancestors lived long enough to reproduce. For me, it wasn’t actually reproduction. It was a purloined kiss. Beyond the good and bad of the kiss and the bruise from a slap to your cheek is a reality that cannot be improved by virtue nor harmed by vice.

I risked the slap that never came.

That’s how it began and I drew much of my
notoriety from the love affair with the girl from the right side of the tracks who ended up striking fear in
the hearts of the great and near great. Everyone knows her story because it’s been plastered across the tabloids and the Sunday news shows. While her story intersected with mine,
it also diverged because she
built a monument to herself with money that she made. I neither needed nor wanted a monument and that differentiation caused things to slip between us.

She felt bound to the city and I felt bound to the country and to the earth itself. Her perfect day began with room service. Mine began with gathering eggs from the chicken coop, cooking them and dipping at the yoke with a slice of crusty fresh bread. She found her spirituality from the printed word and purveyors of influence. Mine had its wellsprings far from that commercial push for community and cult. She liked to fly on private jets. I preferred to sail the Cape on our small four meter sailboat in the gusty afternoons.
I felt that the nicest and sweetest days
were not those in which something momentous or splendid occurred. Taking joy in
a sunrise, the noisy migration of geese, the annoying tap of a woodpecker, and
the autumn trumpeting of elk in the distance has its own splendor, important in
scope and moment to the person that beholds them. These simple days, following
one another like pearls off a string don’t make headlines. They simply are.
Thus we diverged while we were together from the very first moment, which should leave you asking why we chose to spend time together at all. It wasn’t the rough sex that we both derived pleasure from or the intellectual rivalry that caused us to spar on an unusually level playing field. I’d like to say that we simply enjoyed each other’s company and the yin and yang of that was enough and it led to a small wedding, expensive reception and honeymoon that was more of a working holiday. By that time we were each working on different projects.
She hired an influential swami to teach
her to meditate. It’s all in his book. I read it and thought that it was over
done.  I don’t think that he found much
inner peace. He ended up shooting himself in the head. It didn’t say that about him on
the flyleaf in the ‘about the author’ section because he was living when she bought the tome. She came come disconsolate,
accompanied by her entourage, weeping at his demise. The funeral would be
closed-casket. The swami’s housekeeper lived in Dorchester and we, naturally lived in Louisburg. She thought that he was away on a speaking tour and
hadn’t tidied up the place for two months because of the birth of a grandchild and other worthy excuses. When she arrived there were flies on
the inside of the glass windows so thick that you couldn’t see in.  The way I looked at it, there could have been
a number of reasons why he killed himself. His wife could have been a harpy
bitch or the book sales might not have met his expectations. Maybe he suffered
from terminal cancer and simply wanted to move the process along more swiftly
than nature provided?
I hung around with her and
watched while her handlers created her legend, and I think that’s why they
wanted me to read the book, written by the dead guy. They thought that meditation would cure my desire to ride quarter horses instead of dressage and drink beer instead of first growth reds. Unless I changed and reinvented myself, I’d begin to be a sea anchor to her meteoric rise that could end up placing her at the head of the boardroom or even the White House. After the fact prophecies were
fabricated to explain her and they elevated her to the point of being a demigod
for political purposes that I didn’t want anything to do with either then or
now.
I cracked open the dead swami’s book. “Clarity,
awareness and emptiness are inseparable and are spontaneously self-perfected.”
That’s what the book says, but part of me – the Bog Irish part – thinks that it’s a load of crap. The
book says that until you reach a state of enlightenment, much of its precepts
are impossible to appreciate. The book teaches that, “You should relinquish all notions of the past and abandon all precedents. You
should cut off all plans and expectations with respect to the future. Living in
the present, you should not grasp at thoughts that arise but allow the mind to
remain in a state like the empty sky.”

Because I didn’t buy off on the swami, the book, the politics and the lifestyle, the handlers handled me. She found a more acceptable mate, and blackballed, it became difficult for me to find work. They not only wanted me gone from the area, they wanted me removed from the map. But I remained as surely as an unwanted ink stain remains on the nice table cloth.

Then on a cloudy day in autumn when the air felt like snow but it had not yet begun to fall, I saw her walking toward my door as I left for a job that I’d just begun. The third new job that year, thanks to her people.

“Out for a stroll, Sheryl? Slumming?”

“Work. A new job. I’ve had to move my car to a street five
blocks from where I live because there is a crew looking to repossess it. I hope that you and your people are not here to persecute me further. What would the swami say? Parking the car so far away repositioning it constantly and evading the repossession agents impedes my ability to empty my mind completely.”

“Sure, but I can’t be late to my new employment.”


Then the oddest thing happened. She took my hand and we walked together the way we once had.

“You haven’t read the papers?”

“No, and I don’t own a computer or a television. I may not even own a car. We still have four blocks to walk to see if it’s still there.”

“I resigned from government, and gave everything I have away to the poor. All of it except that farm in New Hampshire, which has the taxes paid from a perpetual trust. My husband filed for divorce to save his portion of the community property.”

“It started with a stolen kiss. I would like you to teach me milk a Jersey cow, tend bees, fetch eggs and bake bread in the morning and fish for bass in the pond, if you’ll have me.”


—Ok, I realize that this story is just a little sappy. It’s my attempt at a “reverse romance” style plot. Not my finest hour…