With Fava Beans and a Nice Chianti? 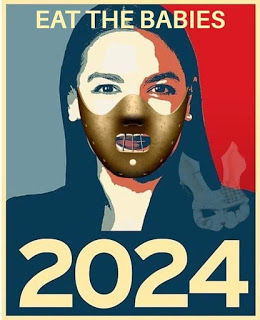 The Swedish scientist that suggested that we eat the dead is now so yesterday. Eat your children? Some people feel that AOC was shocked in her iconic town hall. That’s not how it happened. She was stunned that the answer to the progressive movement was right in front of her all along.
The Democrats have been casting about for something so utterly progressive that they could win a decisive victory against the Orange Man. Gun control has been done before and so has abortion. The one place they haven’t gone is cannibalism of your children. You have to admit that it can’t get much more progressive than that.
DRJIM points out that it may be a hoax, a prank, a troll. Maybe.
“I just hope the “Eat The Babies” person was a very clever plant/prank. If there truly are people out there who think like this, and believe it, we’re doomed.”

The key to pranks such as fake Russians offering to sell naked photos of President Trump to Rep. Adam Schiff (D-CA) and having him take them up on it, for example, rests in a certain philosophy that makes these outrageous things ‘credible’. You will notice that AOC did not denounce the person who purported that we eat children to stop climate change. The Swedish scientist who was going to place to place in Sweden and elsewhere proposing cannibalism as an alternative to other meat and protein was serious as a heart attack. Which reminds me of Bernie…if his heart attack had claimed his life, would his supporters have gathered together for a BBQ?
Mail:
Jim – I saw the baby eating video. She may have read A Modest Proposal and thought it a good idea.

Is there anything more progressive than that? Hillary and Bill had their political opponents murdered in large numbers and because they did it, it’s certainly progressive. Dead men tell no tales and all that. But killing helpless children and eating them is in a whole different universe.

I don’t know about that. It’s widely agreed that she’s the de facto Speaker of the House of Representatives.

(Fredd continues) …, and accordingly, taxes are not going to be redirected into changing the planet’s climate. Just like there are simply not enough people out there who believe the earth is flat, much to the relief of the globe manufacturer’s guild.
Taxing the weather, however, is something that liberals will cling to for some time, as they never give up. It’s just not something that the majority of Americans will buy into. It’s a youth thing, and the rub there is that eventually youth fades and people start to develop brains. Now, if the liberals can come up with a youth serum to keep people perpetually dumb, then we will have a problem…

“The urge to save humanity is almost always only a false-face for the urge to rule it.” – Mencken

“It was always the women, and above all the young ones, who were the most bigoted adherents of the Party, the swallowers of slogans, the amateur spies and nosers−out of unorthodoxy.” – Orwell, 1984

And it’s OK to call a bison a buffalo. All of the time. The lyrics of ‘Home on the Range’ back me up on this: ‘oh give me a home where the buffalo roam, and the deer and the antelope play…’ Brewster M. Higley penned these words in 1872, and he was not referring to Africa (and yes, I saw your ‘pronghorn’ correction as well). He meant the Land of the Free and the Home of the Brave.

Camperfixer – Climate…no amount of factual rationale will dissuade these clowns from their idiocy. In the late seventies my dad said:
“If the politicians could figure out a way to tax the air they will, then justify it.” Always follow the money.

They already want to tax a sunbeam striking a solar collector that doesn’t belong to them.

Old NFO – Yep, don’t see ANY of the climate types going to China, India, Pakistan, or Indonesia and protesting, because they KNOW they will ‘disappear’…

Re the Ngāwhā kauri, it ‘might’ have actually been present during the Laschamp event, depending on the actual dates. We see the pole wandering around, but few realize the potential if the poles actually swap! Nature is nature. WE don’t control it, never have and never will.

There are a lot of swamp creatures that claim they control the weather and they can only be appeased by large amounts of cash. They’d disagree with you. They won’t show you how the magic is done, how the sausage is made. You need to take it on faith, or you’re dead in 12 years.

Jules discusses ‘copping off’ in a tree – Maybe the Major Oak in Sherwood Forest can tell the next tale to the climate creepers of the future. It’s about 1100 years old and by the earliest estimate, it has stood through the Vikings, the Battle of Hastings, Agincourt, ( the French still hate us for that) Waterloo, the births and deaths of Shakespeare, Henry VII, Dickens, Darwin, Newton, Chaucer, Cromwell, the two world wars, over 50 monarchs! It’s the biggest oak tree in Britain, with a canopy spread of 28 metres, a trunk circumference of 11 metres and an estimated weight of 23 tonnes. It is said that Robin Hood and Maid Marion copped off inside its trunk as it is open. I know this as I’ve been inside myself. Not copping off though.

Not snogging, not copping off, just Jules with her halo firmly in place and her x-ray spy glasses. I’m not a denier, though. She does have the glasses, surely as she has the emergency clown nose and the wolf. Thus, it makes sense to accept her condemnation of others for doing the wild thing in a sacred tree. Now whether that sort of desecration of the druid spirits will cause global warming is another thing, for another day.

Paul requires clarification –  “…copped off…”, “…copping off…”. New ones to me, Jules; translations into American for me, please.

It’s one step beyond snogging. Some call it “shagging”. There are more exotic variations. I’ll let Billy Connolly explain. 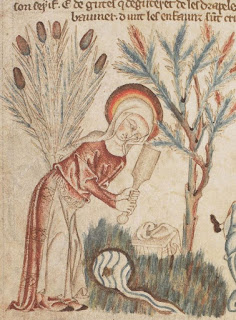 (right) Some Ancient Alien theorists believe that this is an Olde English drawing of Jules in a previous incarnation in Old Blighty, doing something with a paddle and a giant sperm. I can’t go further than that in terms of interpretation. The etching is something like a Rorschach ink blot in need of explanation, though.

Is art philosophy enough to explain the whole copping-off in a tree thing? Or do we need to turn to the late, great, Sam Kinison? (I have no idea how I lived through the 80’s, but I did)

And while I’m on a roll, Kinison on World Hunger. Still a classic. And teaching history at the university.

I have no idea how I got from AOC and cannibalism to a big tree in distant (and foggy) England to Sam Kinison.  I knew Kinison. Not well, but well enough. He was a wild man.

These days I live in a secluded place, contemplating.