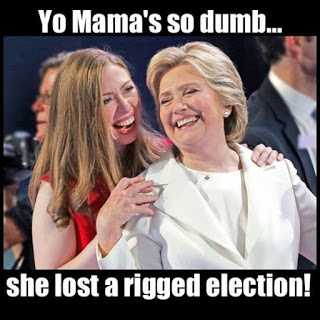 Facebook
Twitter
Pinterest
WhatsApp
She’s Back
I harbored a secret fear that Hillary Clinton would sink to the bottom of her bottle of gin sort of like Jeb! Bush did. But that didn’t happen.

Blogging is not quite the same thing without the presence of the crone and the hoard of adoring flying monkeys that attends her.
Yes, the dream that she’d attach herself to Bernie Sanders is just that – a blogging dream – and endlessly shoveling coal in the pit of hell for Bernie as he shuffles off his mortal coil.
The progs and the filthy denizens of the DC swamp had such splendid plans for a Clinton presidency. Insurance policy and all just in case. And it was destroyed by the Orange Man and his deplorable followers.
But It looks as if she’s back, angling for the Democrat nomination in an exceptionally weak field.
Today’s sermonette is simply advice. Don’t select a witch or somebody who has lost twice before to be your champion, no matter how many people she has had murdered.


The situation remains brittle. Carrie Lam (Party Hack and PRC Governor of HK) directed that it was now a crime to wear a mask in Hong Kong unless you needed to wear one for some compelling reason. 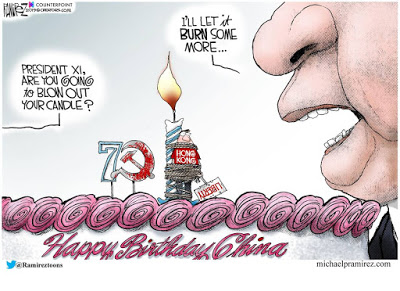 Given that the daily protester count is somewhere north of half a million in various locations around the city, and the fact that they’ve created a “Declaration of Independence” based on the American model, the mask law seems really small. 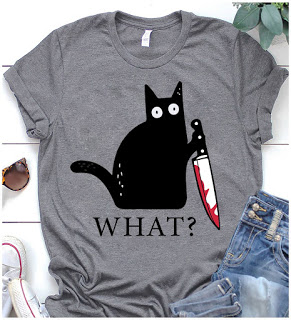 Don’t trust your black cat this Halloween season – just don’t. This is a public service announcement. 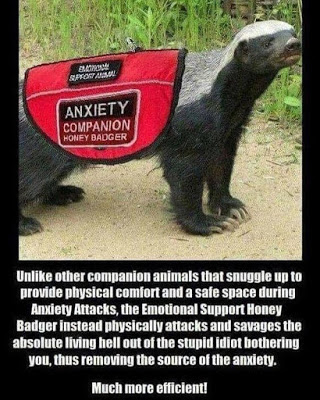 Sometimes I think that this blog is getting out of control…ok, in a good way.

Well now, let me be of art philosophy assistance here! I am quite the interpreter when it comes to Medieval Marginalia. These people were the art philosophers of yore. I may in fact be a direct descendant of this foxy female.
It’s funny how we were just talking about trees and copping off because you can clearly see that this sort of thing has been going on for centuries. Here we have the fair maiden, virginal with her halo, in the prime of fertility -hence pictured between two rather exotic trees. The trees themselves, lush, fertile and enticing; abundant and bearing. Tempting and kinky with their peacock style display. Even the ground below a feracious garden. You can see how a breeder might be tempted. And looky do, what do we have here but a giant sperm monster released by some opportunist lothario ( feet pictured far right as he is forced back to the wastelands after trying to COP-OFF) Fortunately, the fair maiden has her trusty paddle, ready to snuff the sneaky sperminator, keeping her forever chaste and unspoilt.
Whilst the sperm depicted is rather large it is clearly going to take a bigger dick to get her to play ball.

WSF opines that I may be harvesting mushroom that I find in the woods – Have you been gathering wild mushrooms?

Full disclosure, no. But I do like mushrooms, best is as a side to a really good steak, or sliced very thin in a salad, or possibly in a brothy Japanese soup.

Jules (clarifying that the mushroom comment was directed at her) – Not me WSF, I’m from England. But I hear Larry is partial to them on his grilled cheese.

Don’t drag me in to this. I like just cheese inside of my grilled cheese sandwich. No mushrooms or thin sliced ham. Not even bacon. However a side of tomato soup is nearly essential to enjoy a grilled cheese. As opposed to a Phili cheese steak – which is a completely different rant.

Fredd takes on Jules – Jules!! My, but how far you dwellers in Old Blighty have strayed from the Victorian ways! That squiggly thing is a mere puff of smoke generated from a crack in the earth which leads down to Hades. And that club is not a club, but a fan with which the young lass is using to fan the fumes and disperse them in order that they not cause a noxious and evil nuisance. There you have it. Can I interpret or can I interpret? You bet I can.
Halos, fertility, lushness, tempting and kinky, all poppy cock.
And when Bernie kicks the bucket owing to a bad ticker, dining on his carcass will only yield tough and inedible barbecue, unless you really douse it with BBQ sauce, and lots of it. Then maybe…

I think that if you pit BBQ’d Bernie, of course doused heavily with sauce, that his followers might dive in. Face it, if they had good taste, they wouldn’t be Bernie Bro’s.

Jules rejoinders, citing medieval primacy – To be fair, Fredd, that was a pretty good interpretation but since I’m from the core of medieval England I hold trumps on what’s really cracking off.

Fredd surrenders – Jules: all right, then. I defer to those closer to the action than me. But from afar, that squiggly thing still looks an awful lot like a puff of smoke, at least from where I stand 4,000 miles away.Reply

Old NFO – Yep, AOC was played… LOL Re Kinison, MOVE TO WHERE THE FOOD IS!! He was a helluva comic!

He offered the only workable solution to world hunger. Provide them with luggage.

Howard Brewi – About Bernie “A Stranger in a Strange Land” Heinlin. GROCK!

I grock what you’re saying, but I think that Bernie’s Bros. belongs in “I Will Fear No Evil”. Bernie might be “The Man Who Sold the Moon.”