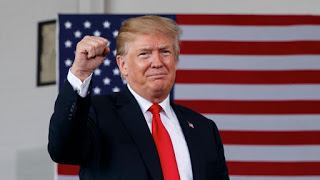 Facebook
Twitter
Pinterest
WhatsApp
Before you presume that to be the case, consider that he might not run. There are a few reasons why he may not and they have to do with personal matters.

When President Trump was simply Donald Trump, everyone loved him. Life for him was easy and fun and a suitable conclusion to a life lived according to his own choice. He had family, friends, health, money…he had it all. And he was disturbed by where he saw the country headed. Horrible trade policy that hemorrhaged money, disastrous foreign policy and treaties, eight years of ObamaNation and Hillary Clinton, the corrupt, cackling crone sharpening her knives to make the situation in America worse. So he ran, and America elected him. And he’s turned the economy around, the military is growing stronger, ISIS has been crushed, North Korea is no longer launching missiles over Japan, China’s economy is in decline because of MAGA, the border with Mexico will have a wall by 2020, the Supreme Court will be in capable hands, taxes reduced to allow business to prosper and possibly 5% growth in GDP. 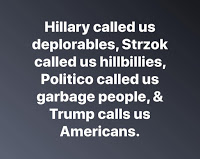 He’ll be 74 in 2020, in good health, and could have good years of his life outside of government with a wife, who is a lot more comfortable as a private citizen than she is in government. He’d have a lot less stress and he’d be in a very small club as a former US President…one of the greatest presidents. If he runs in 2020, he won’t be out of office until he’s 78, and with the toll that those years would take on him, what sort of time would he have remaining? Four years are less precious when you’re young than they are when you’re 74.
I had dinner on Friday night with a personal friend of President Trump, and a frequent guest at the White House. He said that the president may not run for re-election in 2020. He knows that he needs to make a decision after the mid-term elections, and my friend says that it’s 50/50.
If not President Trump, who? Who might run on the Republican side to maintain his legacy?
We all know that there are a chorus of 80 year old Democrats who want the job: Corrupt Hillary Clinton, Communist Bernie Sanders, John (Wooden Head) Kerry, Slow Joe Biden and maybe Nancy Pelosi. There are also younger democrats, most of whom are grievance candidates, collectivists and a bit freakish. Their current platform is to radically raise taxes and give free stuff to anyone who votes for them. It’s s simple plan to set haves-nots against haves in the hopes of winning that way rather than working toward a rising tide that floats ALL boats.